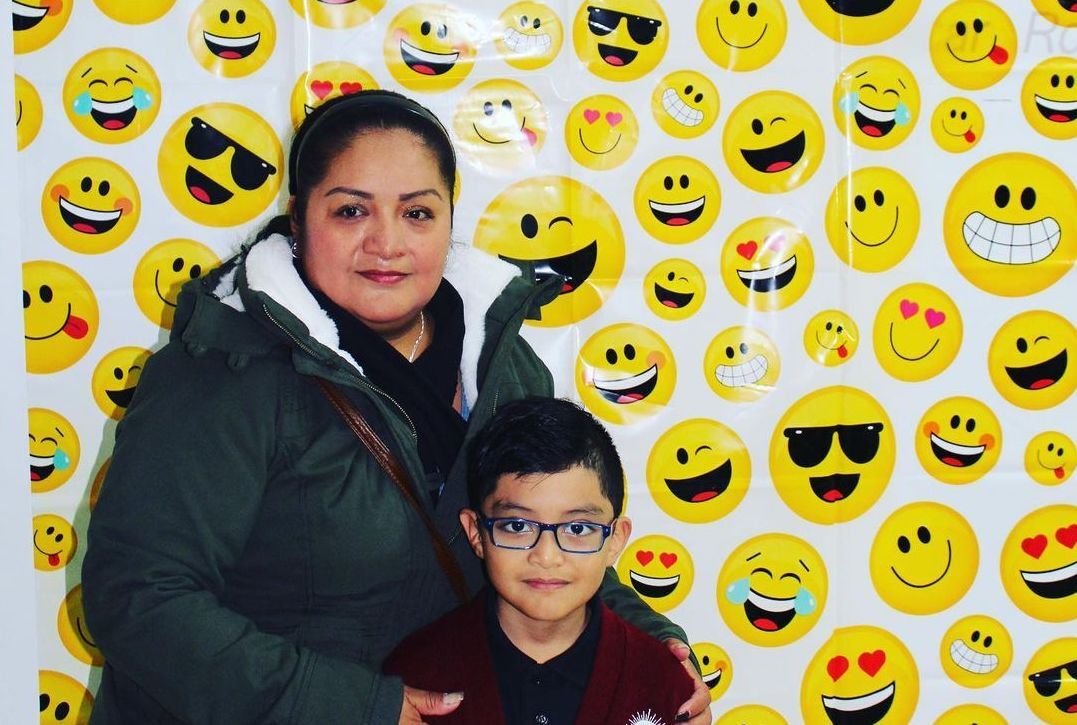 Imagine sending your children to a school where they are greeted warmly by name and you, the parent, are viewed as a partner whose input is welcomed. Most of us would say that this is the kind of school every child and every family deserves to be a part of. Yet for Mexico native Natividad Moina, finding a quality education for her children and a school where they were treated with dignity instead of indifference hasn’t always come easily.

Natividad has two sons, Dylan (eighth grade) and Yoandy (fourth grade), who both attend Brilla College Prep (Middle and Elementary). Their education has become a mutual partnership between Natividad and Brilla that has changed all of their lives dramatically, and for the better, but it was a long road to get there. Natividad was motivated to send her sons to a Brilla school because she “no longer wanted to see [her] son frustrated, angry, upset, saying, ‘Mommy, they don’t give me permission to go to the bathroom; they throw my lunch away.’” Natividad’s response to her son’s struggles? “I said, no, this can’t go on like this. It doesn’t matter, even if it will take me three or four years, I’m going to keep trying.” So she sought other options.

When at first her son Dylan didn’t receive a spot to enroll at Brilla College Prep Elementary through the lottery as a Kindergartener, Natividad didn’t give up hope. She spent two years applying to Brilla until she received a call just three days before Dylan was meant to begin second grade. From a struggling elementary school student to a thriving eighth grader, Dylan is a living example of the impact Brilla has on students, on families, and on the community.

After starting at Brilla, Dylan experienced “a complete 180°,” Natividad says. Not only did Dylan make drastic improvements academically after initially entering second grade at a Kindergarten reading level, he also made emotional and relational leaps as he grew in self-confidence.

“Brilla accepted him, Brilla supported him. Brilla has excellent teachers, and I saw how they unleashed my son’s full potential that I didn’t know he had. Brilla helped him a lot to stand out, to know that his opinion counts, that he can say ‘I do not understand’ and they answer his questions. For me, Brilla was the best, and if I was told ‘You need to move him to another school’, I would never do it.”

Natividad credits the teachers and staff at Brilla for the ways that they communicate with and support their scholars. “I am very grateful for all the support they gave him, for all the work they did with him, because they helped him get better at reading. He progressed a lot in a year.”

And not only in reading. “His character was no longer aggressive,” Natividad says, a behavioral change in Dylan that likely has much to do with Brilla’s approach to student behavior, which incorporates the “Love and Logic” philosophy. “Love and Logic” stresses the importance of human dignity, sharing control, and using an empathy-with-consequences approach that empowers students to solve their own problems while recognizing that each student is unique in how he or she responds to consequences. Parents learn about this approach and how to apply it at home during Brilla’s Parent University. “Love and Logic” is responsible, in large part, for zero expulsions in Brilla’s entire history.

In addition to the impact Brilla’s dignity-centered approach to discipline had on Dylan’s character, Natividad also noticed how her children were growing in other virtues. A significant part of Brilla’s identity focuses on the core virtues of courage, justice, wisdom and self-control. Natividad notes that her “children are very shy. [Brilla gave them] courage to be able to speak.”

So how did these significant changes in her children come about? Natividad expressed gratitude for many teachers and staff, but one of the teachers she credits with Dylan’s exceptional growth is Mrs. Fernández, now Assistant Principal of Culture at Brilla’s flagship elementary school. “The best experience was seeing Dylan come out of his shell,” Mrs. Fernández explains. “The first couple of weeks he barely spoke a word! As my co-teacher, Ms. Perret, and I poured encouragement and love into him every day, coupled with all the hard work mom put in at home with him, his confidence began to grow and his personality began to shine. We started to see more smiles on his face, his hand up more often, and his academics soared.”

Mrs. Fernández also insists that Natividad herself played an invaluable role in Dylan’s success. “Working with Mrs. Moina is incredible because we established a true partnership. She helped me to understand her son better and how to support him in class, and I supported her in knowing how to work with Dylan at home. We were in constant communication about Dylan’s progress, which allowed us to be on the same page.”

Not only has Brilla been a blessing for her children but also for her entire family––physically, emotionally and spiritually. “Brilla, personally, has helped me a lot,” Natividad says. “There was a time when in the pandemic we didn’t even have enough to eat and Brilla supported me. Brilla was always on the lookout. I remember that one day, and I will never forget it, Brilla sent me a pantry box full of food, thank God, to feed my children. I think that’s what stays with me the most and I really thank them for all the support, because they helped me throughout the pandemic, and at all times. I always know that Brilla has not left me alone and has been with me.”

Natividad is referring to one of the many ways that the Seton community stepped up to support families in crisis during the pandemic as part of our Living Hope campaign. You may have been one of the people who contributed more than $35,000 to  buy a grocery box from a local cafe to feed a family for a week. Natividad’s story is just one of many Brilla families who received such generosity.

The thing is, Natividad didn’t even have to ask for assistance. “That’s what makes it more special. She didn’t ask for help. We knew her situation and we came to her. And she told us ‘No, I’ll be fine with just this little bit,’” says Reyes Claudio, Chief Operating Officer for the Brilla Schools Network. “But we didn’t accept that. With our actions and the support of generous donors we said: ‘You deserve dignity.’ Together, Brilla and Seton and El Camino did right by our families. We gave parents what they deserved.”

A willingness to walk with families through all of life is one of the traits that makes Brilla different. “‘Mrs. Moina and her family have really given us the opportunity to serve,” says Yeime Valle, Chief of Programs for Seton’s El Camino Network. “When we register a family to our school we let them know, ‘We’re here to help you. It doesn’t have to be about your children or school. Whatever it is, we may not have all the answers, but we will try to help. Natividad actually took full advantage of that. But then she went to tell people in the community ‘You know what, they actually help you. When they say they are going to help, they actually do it; they aren’t lying.’”

Ultimately, it is this depth of integrity, and the acknowledgement of every person’s inherent dignity, that makes Brilla not just a school, but a philosophy in practice of how people should be treated based on Brilla’s foundational principles.

Like so many of our parents, Natividad is a living example of what it means to partner with parents. She volunteers much of her time to Brilla, and is often the first to step up to support. “I want to thank everyone at Brilla from the bottom of my heart for everything they have done for my sons, and I want to help on behalf of the parents whose jobs don’t allow them to volunteer. I personally do not know how to repay them for everything they have done for my children. So while I can’t pay the teachers with money, I can repay them with my unconditional support.”

The Proof that Catholic Schools Need

A Day in the Life with Mr. Elliot Hachey