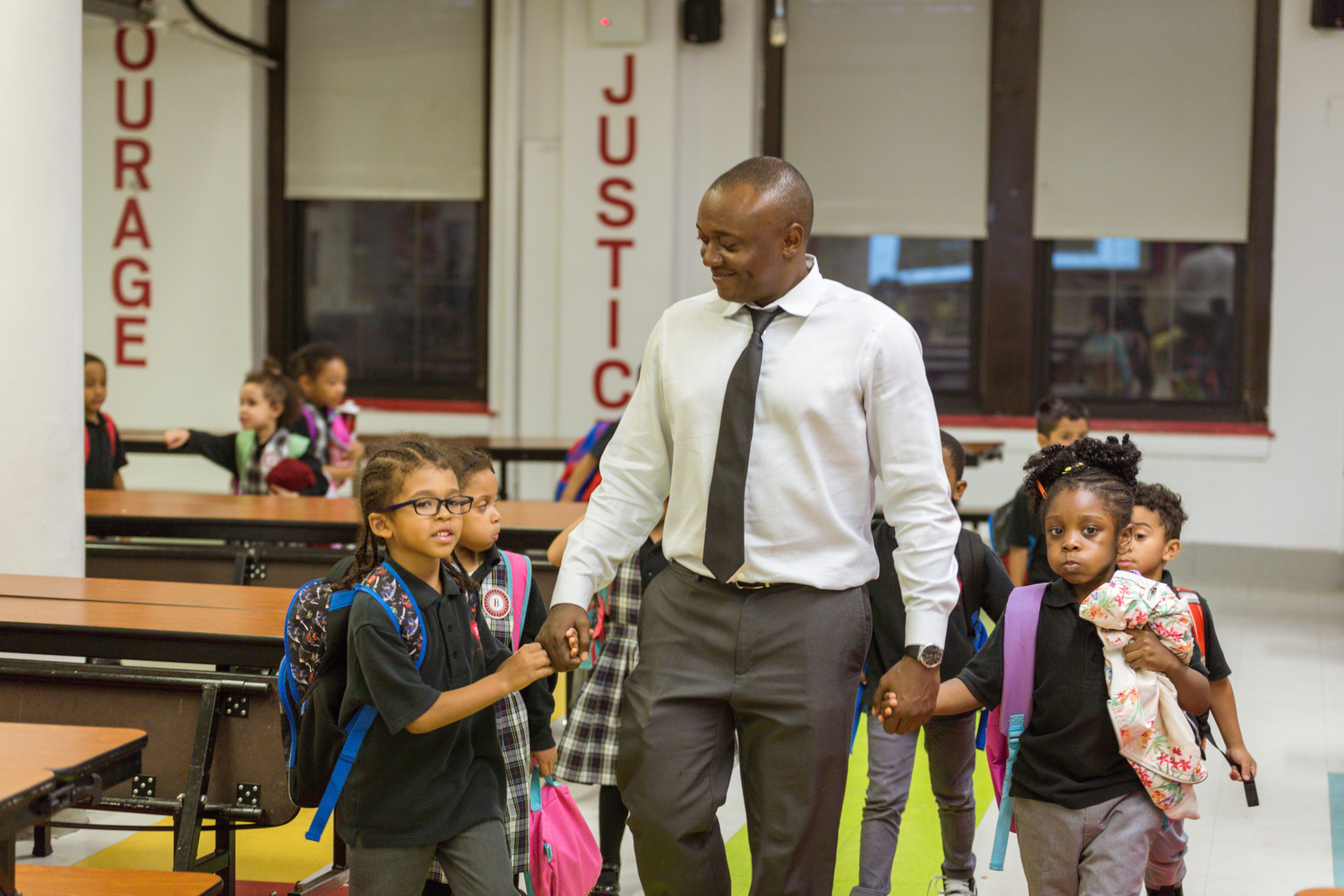 Mr. Shingi Mutasa has worked at our flagship Brilla elementary school for two years as part of our school leader training program before moving on to found Brilla Pax in the North Bronx this fall. We sat down to talk with him about the founding of Brilla Pax, his history within our network, and his hopes for the Brilla/El Camino relationship at Brilla Pax.

First off, we’d love to hear your short bio. Your background, your history as an educator, and a short “why Brilla.”

I am a career-changer. I have an MBA, and I worked in business and finance for a long time. When the recession happened in ’07-’08, I rode it out for a couple of years but finally got laid off when the stock market crashed. When I got laid off, my sister let me know that when she was in college they tried to recruit her for Teach For America, and encouraged me to look into it. I started doing research, and for me, it was like Alice going into the rabbit hole learning about educational inequity. I was like, “I see a calling here.” My thought initially was, “I’ll do this for two years. I’ll help close the achievement gap, teach in an urban school, make a difference, and then go back to finance.” But man, when I started, I just fell in love. My first job was as a teacher at an all-girls high school in Brooklyn. I ended up staying beyond the two years because I felt a calling. My dad and grandma were both teachers. I saw it in my blood.

Why Brilla? It started with me being at Fordham grad school for Teaching and Educational Leadership. Through various platforms there, and through my mentor, Seton came onto my radar. The Seton-Brilla model was amazing. I fell in love with it. Obviously, I am a Christian, and it was so important to me how the secular world and Christian world were merged through Brilla. The fact that this model was working really intrigued me. Long story short, they were looking for a principal to open a school in DC. I applied, and after two days of rigorous interviews, I was happy to get the opportunity, even though I ended up staying in the Bronx.

The Brilla school that you are the founding principal of has a unique name: “Brilla Pax” and has its own mascot, a cardinal in the Brilla Bird Family named Leroy! What is the story behind the names of Pax and Leroy?

Mrs. LaVigne (our Chief of Schools at Brilla Schools Network) met with me and Zoranlly, the principal of Brilla Caritas, and she said, “We’re opening two schools, one is going to be called Brilla Pax and the other, Brilla Caritas. So you decide between each other what you want to be the name of your school.” We didn’t do rock paper scissors, haha. We did research on the names: Pax means “peace” and Caritas means “charity” in Latin. Honestly, the idea of “Pax” resonated with me because I have heard the same thing many times from my family and friends: “Shingi, man, you’re the peacemaker.” So, the name resonated with me, with who I am.

In terms of Leroy, I had full discretion on picking everything about the mascot. So for me, there are a few ways his name is significant. First, obviously, I am a black man, and the only black principal of our five Brilla schools. It is an important part of my identity, being black, and I wanted a name that resonated with that blackness and the black part of me. Leroy is a popular name in the black community. But more than that, Leroy comes from the Nordic, meaning “king.” We’re opening Brilla in the North Bronx. I’m a big Game of Thrones fan, and in the show I’m a big fan of the King of the North. I say, “We’re coming to the North, we’re not here to play games, we’re here to stamp our model, stamp what we’re about, and we’re here to do real work.” Leroy is also bald, like me!

Before taking on the role of school leader at Brilla Pax this year, you spent two years at our flagship school in the South Bronx, Brilla College Prep Elementary. What was that experience like and how has that formed your vision and hopes for Brilla Pax?

When I was hired, I was originally asked to open a school in DC. That changed, and I was able to do two years at BCPE. I appreciate how providence worked in the end. At BCPE, I got to really internalize and understand what Brilla is. It’s the flagship campus, and when I was there it was fully a formed K through 4th grade school. I got to see the Kindergarten experience, which is so important because I’m founding a kindergarten at Brilla Pax, but also the 4th grade experience . Through interacting with the teachers and students, I was able to internalize what Brilla looks like across all grades: that developmental progression through the years. I’ve always had a very clear vision of what I wanted the school a lead to look like. I was able to align that vision to Brilla and Seton, and that alignment is part of the reason why I was hired for this job. I actually have an image of it in my office: Love, Joy, Excellence, #BrillaPax. Love: we love our kids, and we introduce them to love. Joy: we are joyful in our work; in our rigor we are happy. Excellence: we work hard and we want to do good work with high standards and high expectations.

You experienced being an El Camino activities teacher during your first year at Brilla. What was that like? What are your hopes for your school’s partnership with El Camino as the school leader at Pax?

The reason I came to Brilla was through Seton. The Seton model is really important to me, and by extension, this meant really immersing myself into El Camino. I didn’t have to do this. It was a choice I made. I remember Mrs. Meagher, the El Camino leader saying, “Are you sure you want to do this? It’s going to be a lot of work.” But I wanted to really understand El Camino, and the only way to do that is to experience it through a full year. I am so grateful I did that because not only did I come to understand how El Camino partners with Brilla on an experience level, but I also learned the impact of those formation lessons on the kids. I was there for the communions, the baptisms, the prayer, for the catechism, and I was just totally immersed. I was a part of the El Camino family. It really added a level of depth to the relationship I had with the kids and the families.

Obviously I was also able to work with the Fellows, and learn about how they do their work. One of the biggest things I learned is that, because it’s the same student, you can’t separate the work that Fellows are doing from the work that teachers are doing. Teachers & Fellows, we all want the same thing. Ultimately, what we want is the flourishing of the kids. Whether it’s secular flourishing, or non-secular flourishing, it’s the same kid. Obviously, there’s character education programs that are aligned to the formation aspect of Catholic education, and we bring those to life through our core virtues. There’s so much overlap, and it makes so much sense within this overlap to view the Fellows and the El Camino program as true partners.

Fellows are not here to make copies, to do errands. They are here to serve, but they are also here to be a part of the team. We have their names on the classroom doors with the teachers names. We train them to be guided reading teachers and give them pedagogical development, because we want them to teach children rather than supporting teachers administratively. It’s so important to the point that as admin we rotate how we check in with them. Every Friday at Brilla Pax, each Fellow checks in with a member of the admin team: either me, Ms. Davis (Assistant Principal), or Mr. Guadalupe (Operations Manager). We want to hear their concerns and what’s going well!

You chose to hire two Seton Teaching Fellow alums to be founding kindergarten teachers at Pax! What is your vision for them? As STF-Alums, what strengths do you think they bring to a new school?

With the alums, I have Ms. Reinart and Ms. Morales (both of STF Cohort 6). I think the thing they bring the most is the culture aspect. We have teachers from Success Academy, KIPP, and Achievement First. These are high-achieving charter schools, and these teachers come with a wide skillset of technical experience. Now, we need to Brilla-fy them. We need to expose them to our culture by leveraging people who have been in our Network. People who will say “This is the Brilla way.” Ms. Reinart and Ms. Morales are the culture carriers for Pax. We are in a new community, far away from the flagship. Culture is so important for founding a school. Obviously, also, they are also just cool people…It’s a calling for them! They aren’t just doing this because it’s work.

Daring to Do Things Differently