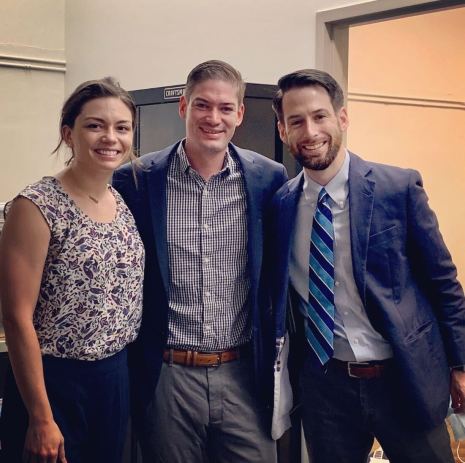 First off, we’d love to hear your short bio. Where you grew up, where you went to school, and a short “why Seton.”

I grew up in Cincinnati, Ohio. I went to undergrad at a small liberal arts school in Cleveland called Wooster. I studied philosophy there, and as an undergrad, I thought I was law school bound. However, at the end of college I really felt an urgency and a call to do something different, and to make a meaningful impact. I ended up deciding to do Teach for America and was sent to Indianapolis, Indiana. I was serving at a high school of great need. Not by design, but by reputation, that school in Indiana was known to be the last stop for high school students before dropping out or before entering the criminal justice system. It was a school of great need, but also of great opportunity. While I was there, I taught special education courses as well as what you’d refer to as a general education course in American Studies, Interdisciplinary US History, American Government, and American Literature. I also ended up being the Varsity Soccer coach, which was a fun and amazing experience. I served there three years, and I think that two of my players in those three years had ever played before. Great relationships were formed through athletics and sports with my students there.

On the personal side, I got married. My wife is from Cincinnati, and we’ve known each other since we were 17. Our first son Jack was born shortly after we married, and we started feeling that gravitational pull back to home to Cincinnati.

I then taught Social Studies at Cincinnati public high schools for a number of years, which led me to Seton. I felt that longing to do more and to be part of an organization that could really make a change. The district serves a great need, but there’s not the sense of mission so I was feeling restless.

At the time, that restlessness was not religious because I had not joined the Church. But, I wanted to do something more. Then, I met Emily Gillbride at a TFA event. I remember thinking, “Here’s a person who clearly loves their work, loves who they work for, and has a sense of mission. I really have to check out what Seton Partners is doing.” Flash forward a year, there was a job opening in Cincinnati and I applied and got the position. At the time I was one of two non-Catholics at Seton! I’ve been working with and for Seton for five years. In that time, lots of professional opportunities happened, as well as big changes on the personal front.

Because of the push from my family, as well as witnessing the lived experience of people on my team, I was inspired and motivated to eventually take the launch and begin RCIA. After eventually joining the Church, the opportunity to join Romero came about.  I saw the need and felt the call.

Romero’s full name is “Romero Academy Resurrection.” What is the origin story behind that name?

The school, the physical building itself, is a 100 year old traditional parish school in the neighborhood of Price Hill, Cincinnati. For the past 100 years it’s been called Resurrection School, for the Resurrection of our Lord. The church that is still a functioning church across the street is still called Resurrection, and so we wanted to pay homage and due respect to the legacy of Resurrection school, the church, and the community as a whole. We are a new school. Romero Academy is bringing in a brand new academic model, but we are doing this work at a physical place that has history and importance in the community, so we named  this out of respect and deference to those who have come before. I’ve looked at the old records of the school that was founded 100 years ago by German immigrants. It’s always been a school that has served the underserved and welcomed newcomers to this country. With that, I feel that we’re not creating something different we’re creating a new chapter.

In what ways do you see Romero Academy as influenced by Seton’s other projects?

In a lot of ways, our project here is a distillation or a culmination of all of the work that Seton has done over the past decade. So I think about the work on the Blended Learning side, and the lessons, strategies and practices that we found, we are applying to this academic model.

I spent time at Brilla last fall, and there are so many lessons learned and strengths that I saw. At Romero, we get to take all of those lessons and apply them. So we really are a distillation and merger of this work that Seton has been engaged in.

To add to that: personnel matters a ton, and we are lucky to have representation from the different worlds of Seton. I was on the blended learning side, we have John, Shannon, and Sami from the Brilla and El Camino side, and we have the incoming Seton Teaching Fellows, who are part of a program with an established structure and mission. It’s tremendous that we get to bring the strengths of these facets of Seton together in this particular location.

What about the curriculum specifically at Romero Academy Resurrection is influenced by Seton’s work in education?

It’s not what we teach that comes from Seton, but how. The blended learning work has always been predicated on organizing a classroom such that teachers can teach in small groups. The magic of Blended is the interaction that is happening between students and teachers in that small group context.

When you have 5-8 children with you, there’s not an opportunity for children to get lost. We’re here, side by side, we’re working together.

The way we approach teaching here at Romero is predicated on those small groups, and when students are not with their teacher and are at a computer station, the content they’re engaging with is very rigorous and has been vetted in the Seton Network in the past 10 years in terms of what works, what’s best, and how to use those programs in a way that supports students.

Again, it’s not the what, it’s the how. Many schools use our curriculum/programs, but it’s the fidelity in which we use that content and the intentionality we use in order to meet student needs; that is what sets Seton apart.

In New York, we implement the cultivation of virtue during the school day within our character curriculum and school culture, and during El Camino, the faith-based after school program. Will Romero be continuing this work of focusing on developing the character of students?

On the character side, the work we do at Romero is heavily modeled after what Brilla does. In terms of the El Camino curriculum, it’s 100% transferrable. The difference is not what we’re teaching, it’s when. As a Catholic school, we imbed our El Camino curriculum into the school day.

In the hallways, we’ll have iconography for our virtues as a physical representation of what we prioritize. We include the classical virtues: courage, justice, wisdom, and self-control, as well as the Theological virtues: faith, hope, and love.

What excites you the most about being the principal of Romero?

First, this past summer has been such a journey. We’ve basically been working out of a construction site. It’s been hot and dusty, the power and the wifi have been out. We’ve put so much work into the building itself, but I know that on the first day of school it’s all going to be worth it.

Once the children are here, I cannot wait to see the team we have assembled get to the work of teaching and learning. We have an incredible group of educators, and our STFs are just tremendous. The joy I will get is when I get to see the folks that I’ve interviewed do this work together will be incredible.

This will be the first time you have worked directly with our Fellows program! Can you give a short overview of the role you hope they will have in the school, both academically and in the context of staff/school culture?

We’re really going to ask a lot of them. Each of the Fellows will be assigned a home base in terms of academic support. During core content, English Language Arts and Math, they will be asked to facilitate full-group instruction. They’ll be in classrooms. Then, they also will lead two sections of Theology on a daily basis.

In addition to that, one of our Fellows will lead elective enrichment. We ask a lot of them, and really every minute of their day will be accounted for.

In terms of culture, I do not take for granted the fact that we have four young men that are devout and serious about their faith. I see them really as serving as an example of the living Church. It’s the small things: to see a young man of their age, leading prayer in a classroom will just be such a beautiful example for the students we serve as well as the rest of the staff. We will lead heavily on them for that. They will serve as living examples of the faith and of the virtues in those relationships with the students and their co-workers, and I could not be more excited to see how that will shape our school culture.

Giving a Second Year to Christ: An Interview With Alejandro Uribe

The Call & The Mission