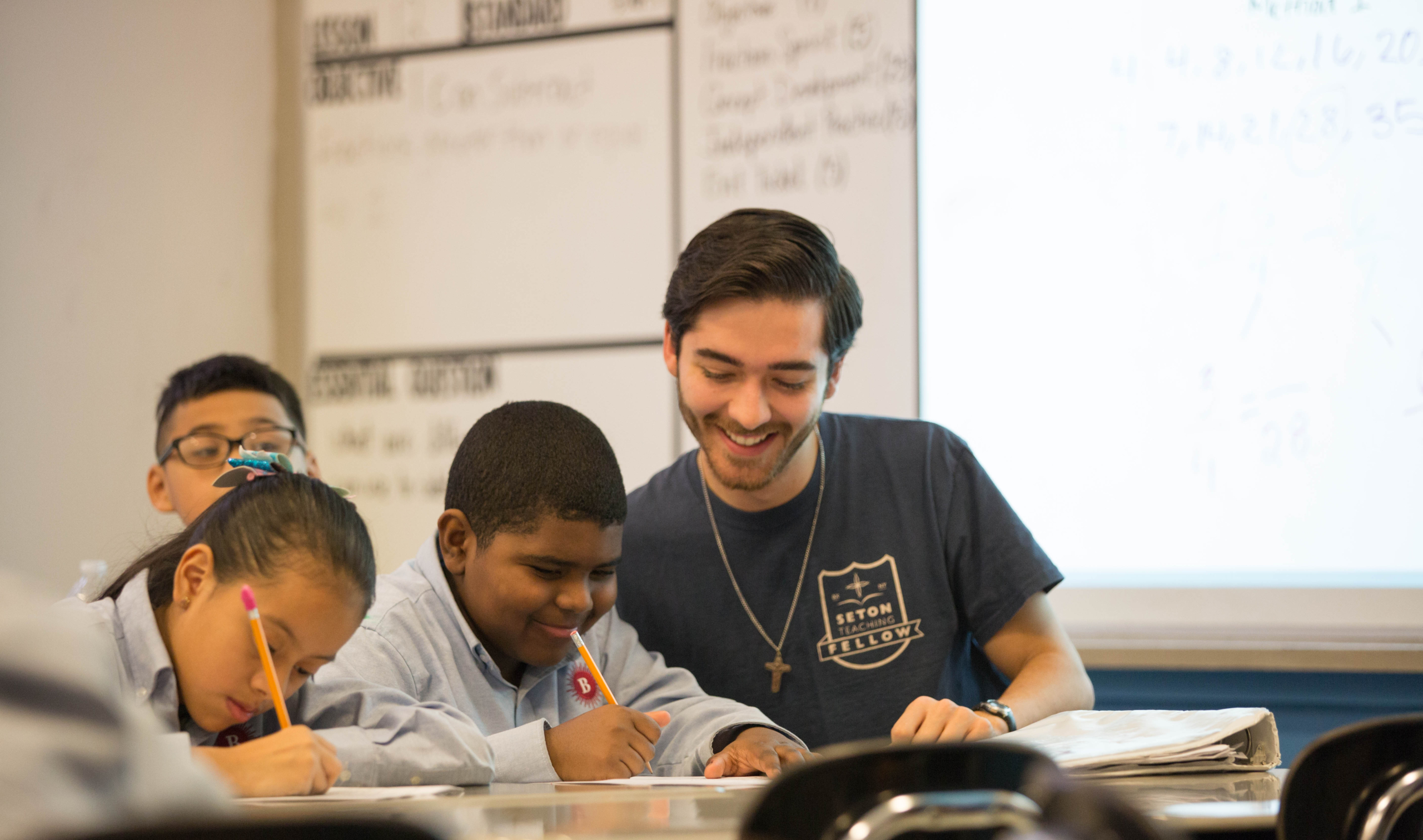 Jude Ledyard graduated from Franciscan University in Steubenville with a Bachelor’s Degree in Education. In college, he played soccer and was involved in mission outreach, where he first encountered the South Bronx on a mission trip during his Junior year. He served as a Life Teen Counselor and was the Choir Director for a local middle school in Steubenville, OH during his undergraduate years. These experiences and more have helped form Jude for his role as a Seton Teaching Fellow, where he teaches 5th and 6th grade at Brilla College Prep Middle School and El Camino.

So tell me a little but about your background. What in the course of your life prepared you for missionary work as a Seton Teaching Fellow?

Gosh. Everything. I’ve realized that more and more as I use different skills throughout this mission, and life in general. I started knowingly preparing for mission early on during my time at Franciscan. When I was a freshman, someone told me after the mission trip we did together, “mission never ends.” So my friends and I would say “mission never ends” to each other. And when I think of it now, it was kind of a joke more than a reality, but it came from a true reality: the fact that mission really does never end. It wouldn’t make sense to block out a time to do good, if we weren’t supposed to do it other times as well. When I was on mission here in the Bronx, I realized the most important thing I could do might be talking to the person I met at McDonald’s or on the Subway. Remembering to keep people at the forefront of the interaction is something I’ve really kept with me.

What initially attracted you to Seton Teaching Fellows, and what was that discernment process like?

The initial attraction started two years ago, when I was on mission down the road (from our schools in the Bronx) with the Franciscan Friars of the Renewal (CFRs). I had a friend who was a Fellow at the time, and I was able to go visit her at Brilla Veritas. It was a beautiful opportunity to see a school that was committed to the virtues, but that wasn’t Catholic. Being an education major, I hadn’t had an opportunity to see something like that. Once I got to my senior year, I had the chance to read more into the program, and realized how many things in my life had lined up to this opportunity. I loved my experience in New York, and in the Bronx, I was an Ed major, and I wanted the experience in a school before taking on my own classroom. I also realized the pros of Catholic community as more and more of my friends graduated from college and talked about their experiences postgrad.

As far as discernment. One of my friends was applying for Seton Teaching Fellows, and told me she had gotten an interview. Right when I found out, my initial thought was this is horrible. I wanted to do my own unique thing, independent from my friends. So, I told her I was done thinking about it. And she said, “First of all, do you realize how crazy that is? And, second of all, this opportunity is incredible, you don’t want to pass it up for something that petty.” She helped me realize the facts, that this is an incredible opportunity to love and serve.

Now that you’re here, what would you say is the most important thing you do as a Seton Teaching Fellow?

Gosh. There’s a lot of things we do on a daily basis that are really important. One thing that I’ve found incredibly beneficial in this program is the fact that I’ve been reaching out to kids outside of school. I go to their basketball games, soccer games. The difference it makes in my relationship with them is tremendous.  One kid looked at me after I said that I would go to his basketball game and said to me “Mr. Ledyard, I’ll never trust you again if you don’t come, because you promised you would.” When I showed up, he and a few of my other students just lit up. He and his friends wondered where I live, and why I would spend my free time to come to their game. I basically told them that of course I am here for them, that I live in the Bronx, and that the whole reason I’m living there is for them. It’s helped my relationships so much.

Is there a student that has particularly opened your eyes to the importance of this mission?

100%. My first experience with one of the disciples I’m closest with, was when he was transferred into my classroom for the Blended Learning block of the school day. He was yelling and just really upset, and I had to ask him to leave the classroom. Another teacher brought him back to our class to apologize, and during our conversation, I taught him how to shake someone’s hand. I showed him how it should be firm and that he should look the person in the eye, acknowledge them, and respond to what they say, giving them his full attention. Since then, he has always shaken my hand and said, “How are you Mr. Ledyard?” I started talking to him on the way to and from recess, and he would tell me about his dad, and one time we raced each other. Every day, he would talk to me about his Dad; about how I reminded him of his Dad, about what a gentleman his dad is, how he goes to China, and to Honduras, how he is a professional soccer player and how he loves him. One day, as he was talking about his dad, his words got slower and he put his head down. He started to cry. He kept talking about his Dad, and finally said, “My dad died 4 months ago but I love him so much.” I realized that this whole time, he had been speaking in the present tense because he hadn’t yet come to terms with his father’s death. I told him how loved he was, and how proud his Dad would be of him for being such a brave young man, and for having conversations like this.

Every time there’s recess now, we in walk together, and he asks me “which bench,” because he knows we’ll just sit and talk. Right now, he wants to work on practicing his relationships with others, and told me he wants to start with our relationship. He wants to work on being more honest. I love this scholar and what he has taught me about being a better teacher. Our relationship is really changing both of our lives and that is so beautiful. What role do you think community life plays in the formation of a Fellow as a teacher and as a person?

One thing that we teach our students a lot is respecting the human dignity of others as well as yourself. It’s one thing to say that, and it’s another thing to demonstrate it. Being able to go home and practice those same virtues that we teach the students is something so beautiful. I am not going home and living a different life. I am right here, doing this, living this way, growing this way, growing in faith and virtue, alongside them.

Has being a Fellow influenced your prayer life?

Tremendously. It’s so consistent. As Fellows we have daily mass, and adoration once a week built into our schedule.  I personally do a daily prayer during my walk to and from school, and my community and I do morning prayer together. It’s all really beneficial. My prayer has become so much more specific. Instead of my prayer being centered around myself, my health and my needs, there are so many specific people and situations that I pray for. I’m able to see the specific effects in my life.

Do you have a favorite book, scripture passage, or prayer, that has helped you in your mission?

Litany of Trust, written by the Sisters of Life. Outside direct instruction at El Camino, would you say there are some ways you all are facilitating an encounter with Christ with your students?

Definitely. My first thought to that question is students who aren’t in my El Camino after school Catechism class. It’s important to practice being the same person through the entire day, in the school day, and then in El Camino. Being a loving teacher period. As I think about it more, a lot of my favorite experiences I’ve had, have been through non-explicitly teaching the faith. There are a lot of teachers that aren’t Catholic. One in particular tests me with different questions all the time, to see if I answer with love and respect. There’s always an opportunity to share Christ with others.

What advice would you give a future Seton Teaching Fellow?

Keep part of your home with you while you’re on mission. Whether that means specific prayer that you don’t want to drop, times in the day that you do X,Y,Z. Even just talking to friends on the phone. Keeping relationships and habits from home helps keep me grounded in remembering why I’m here. They are an anchor that reminds me of why I said Yes in the first place. I’m here because I want to give, to use the gifts I’ve been given to serve this community. And there are so many more people who the Lord is calling to enter into this. It will change your life!

The Grave: A Short Story about Truth, Beauty, and Goodness