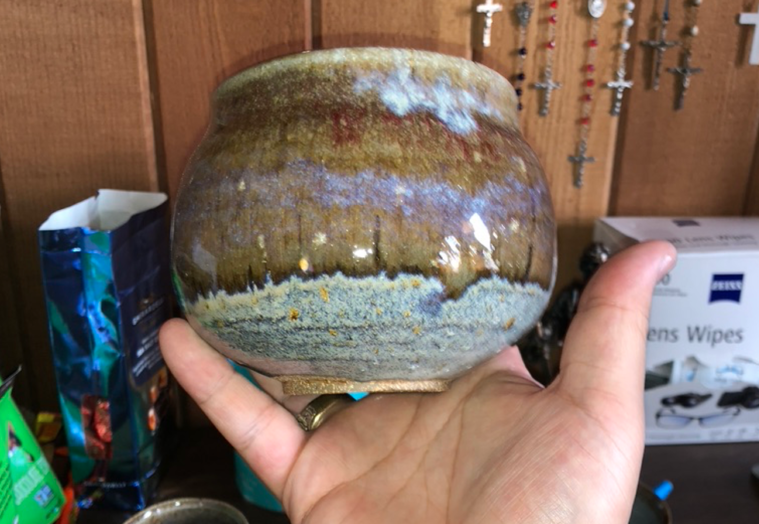 My friend Abram sent me a post on Instagram: “God is the potter, gently molding and piecing things together with His love, and He’s piecing you back together.” It wasn’t the first time I’ve heard God be described as a potter, but the analogy always fascinates me. What a beautiful analogy! The first man is made out of clay and He breathes the Spirit into Adam and boom, man is made.

Saint Paul asks the community in Rome, “Will what is molded say to its molder, ‘Why have you made me thus?’ Has the potter no right over the clay, to make out of the same lump one vessel for beauty and another for menial use?”

“Has the potter no right over the clay?” I made it a goal of mine this year to work on obedience, but what does that mean? I’ve been looking to Thomas à Kempis and St. Benedict for guidance, but the reality is that I’m not a monk, and they wrote for the religious. What they have to offer though, is still good and important, but who am I called to obey and why has this desire been placed in my heart: to obey? The way that Seton has our communities set up, we have no household leader. We have different responsibilities within the house but there isn’t one person in charge. I’m learning that besides needing to be obedient to my manager within the El Camino curriculum, I am being called to be obedient to my community. St. Bennyboi says, “The excellence of obedience is not only to be shown by all towards the abbot, but likewise let the brethren also be obedient among themselves, bearing in mind that by this way of obedience they will be journeying Godwards.” We obviously don’t have an abbot because we’re lay missionaries; John Lane is the closest to an abbot I’ll ever experience (I’d follow Mr. Lane into a fire by the way). Who am I called to obey?

Senior year of college I lived with two missionaries and another student; we were a part of a really charismatic and intentional community. Going into this year of being a Seton Teaching Fellow I thought I was the most prepared I could be; because a large part of being a Fellow is our immediate community, and I had just experienced a healthy one. The sentiment holds true; this last year has helped me now, but community now is nowhere near what I experienced with SPO. As a Fellow we build a covenant that we hold ourselves to pretty rigorously; in some ways you could say that our covenant is our household leader. The four of us as a collective group came up with what we put on the covenant and we have different roles and responsibilities that we are each in charge of to help better facilitate that covenant. It’s not easy and I have already seen fruit in my own life from trying to live that covenant out.

I do ceramics for fun; it’s relaxing to me. There is full control over what I’m doing with the clay. If I don’t like how thick the wall of a bowl is, I can stretch the clay and make the wall thinner. I can make it look how I want it to look. I can pick different clay bodies, I can glaze a piece green, or black or whatever color I want; there is liberty and freedom within ceramics that is truly beautiful. Should that freedom translate into my mundane life?

Paul asks; “has the potter no right over the clay?” and to Paul I say YES! He does! I do! I can trim here, tear there, cut a hole here, make this bowl a hanging planter instead. Life is simple when you’re the potter and control the clay, but my challenge this year, should I choose to accept it, is submitting to be the clay. If I truly want to pursue and be pursued by the Father, I know that I cannot be the potter of my life. I don’t know what’s best for my life without being Christ centered. It’s all ultimately God, He is THE potter after all, right? He has every right to my life because I am actually the clay and He is the potter in the universal picture. But, on the ground, in the nitty-gritty (not to say that God isn’t here, because He very much is) the potter is my community and we’re also the clay to each other.

In my experience thus far, the community I’m living with has been the hardest part of being a Fellow. My heart also tells me that I will learn the most from them if I choose to submit and choose holy obedience. Saint Benedict says that the “first degree of humility is obedience without delay.” Choosing to listen and obey each other has helped me grow as a man. Thomas à Kempis says, “It is a very great thing to obey, to live under a superior and not to be one’s own master, for it is much safer to be subject than it is to command…Go where you may, you will find no rest except in humble obedience to the rule of authority. Dreams of happiness expected from change and different places have deceived many.” I have been that many that have been deceived, thinking that only when I graduate, or when I move to Cincinnati to join this mission things will change. It’s looking like the only way things will change is embracing the three men that I live with and letting them embrace me. Every part of who I am, the good and especially the parts that I don’t even like about myself. Christ, through each other, is trying to love us and help us grow. We just need to be docile and listen.

Pray for Mr. Mata, Mr. Kieffer, Mr. Kiernan and me!

Alex Rodriguez serves as a fourth and fifth grade Fellow at Romero Academy in Cincinnati, Ohio. He graduated from Benedictine College, where he studied Theology and Education and was involved in the St. Paul’s Outreach community. His humor, his authenticity, and his craftsmanship with clay bless his community and his students.

Answering “Will God Go Grey?” – The Work of a Seton Teaching Fellow

The Call & The Mission