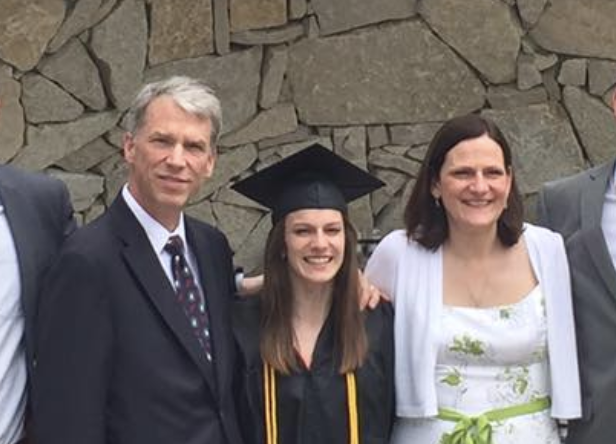 What were your initial feelings about Claire wanting to move to the South Bronx to do a missionary program post-graduation?

The surprise was because we thought Claire’s goal all along was to seek a Catholic elementary school teaching position back in our archdiocese in the Twin Cities. She had gone fairly far away from home for college, and she had expressed a desire to come back home afterward. Our understanding of Seton Teaching Fellows, even from Claire, was initially off. It was only after she started the program that we actually realized it was more of a true missionary year for her, as opposed to her first job out of college. She had clearly told us this time last year that she felt the Lord was calling her to do it, and so in that vein we knew it was a mission calling. We wanted to respect her autonomy and we knew Claire was both quite mature for her age and very prayerful and faithful. She was capable of making this choice using her intellect and of her own free will. But we were indeed surprised.

The concern was both in the sheer distance from home (and the knowledge that we would not get to see much of her) and for her safety. At the same time, we knew that if the Lord was calling her to this, it was something she had to do, even with the risks. We had to pray for the grace of “holy indifference” knowing that if it was the Lord’s Will, then His Will should be done. Since last July when she got on that plane to LaGuardia, we have prayed every day (sometimes many times a day) for the Lord to protect her, to send down Claire’s Guardian Angel to keep a watchful eye on her and to keep her safe. That is all we could do.

Our happiness was for Claire since she seemed so sure of her calling. She was excited for this opportunity, so we were very happy for her. She would light up talking about it. We also knew that not all college graduates are as excited about their next steps. It wasn’t so much that it was some great adventure she was attracted to as much as the clarity of the calling, which she had seriously discerned for months in deep prayer. She had taken it so much to prayer, our happiness was in knowing this is how she came to make the decision to go.

Have you seen significant growth in Claire since she joined Seton Teaching Fellows? What has this looked like?

Yes, and that is really saying something. Claire has always been “the mom” in her group of friends. She has always been the organizer, the one to lead, the peacemaker, the calm head in the group. She had a certain maturity about her from a young age which generally manifested itself in a can-do attitude paired with bravery and perseverance. We saw her display these characteristics in a wide range of circumstances over many years, starting as early as kindergarten. As a child and throughout her teen and college years, she was not easily roiled, and when the stressful times came, as they always do, she was the first one to step back and approach things saying “ok, then we’ll find another way” or “things could be worse, so let’s figure this out.”

At the same time, on the other side of that optimism has always been a certain level of naiveté. Most of that comes from being young and inexperienced, so we have never wanted to discourage her optimism. As her parents, though, we have found ourselves having to gently ask some probing questions to assist her in thinking things all the way through.

One of the biggest areas of her growth over the last year has definitely been in better understanding the realities and challenges of the world. She is a problem-solver, but she has learned that there are many things that are simply beyond us – that our desire to make a difference doesn’t always translate as we’d like it to. All we can do is to do our best, but so much needs to be turned over to the Lord. This was our own growth in “letting go” as we watched Claire move to New York. We turned it over the Lord, and she has had to do the same with many situations over the last year.

On the whole, there were mostly positive experiences and much happiness. But she faced many trials, especially with some of the students. Those trials made her stronger, both in what she could handle and what she learned to give over to God. Seton Teaching Fellows has made her an infinitely better educator and this experience has been invaluable as a candidate for teaching positions here at home.

Along with the experience of facing these trials, she was also able to throw off discouragement. Her own characteristics of bravery and perseverance have made a lot of this possible, but we have seen tremendous growth that she herself has attributed to her STF experience, both in the school and with her community – especially her flatmates. She found a lot of support and consolation within the community, and that was among her greatest gifts in leading to her growth. The program design does a good job of giving the Fellows what they need to take on challenging roles and positively touch the lives of the children and the families they are serving.

How would you describe Seton Teaching Fellows to other parents who might have children considering joining the program?

Seton Teaching Fellows is a mission year in a Charter School in the South Bronx, assisting experienced elementary/middle school teachers in the classroom and leading/teaching Catechism in an opt-in after-school program. It will certainly challenge your son or daughter in new ways, but it has been designed to provide the support system needed for those challenges to translate into positive growth for the Fellow. It isn’t for everyone, but if your son or daughter is called to it, you will be very happy you supported his or her decision. You will be very proud of what your son or daughter will do and become.

From a parent perspective, would you recommend Seton Teaching Fellows?

We would recommend it, but it depends on the person, what they’re seeking, and why. It is not for everyone, and it is a step that shouldn’t be taken lightly. We would say it can be a great experience, but that the decision to do it has to be deeply discerned. In other words, the young person must take it to prayer over a period of time. We believe a candidate for STF really needs to experience a call to it. It should never be seen as a fun or exotic adventure to live in the big city. Young people doing this program will need to be well-grounded, especially well-grounded in prayer and faith life.

Thank you to Mr. and Mrs. Mealey for raising such a wonderful young woman and providing this thoughtful insight on their daughter during her year as an STF!

Through the Eyes of Carlton

An Interview with Aaron Brenner