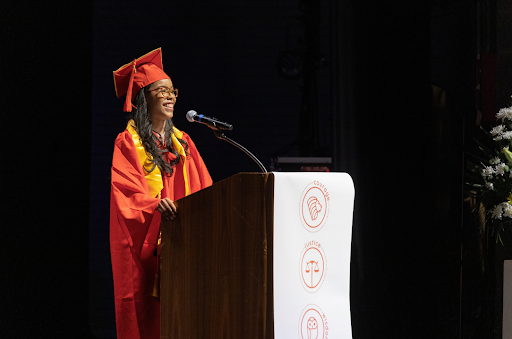 A holistic education where children grow intellectually, socially, and physically is at the core of Brilla’s mission, but it is also an outcome that no test score or grading scale can measure fully. Only the scholars themselves, as well as the fruit their lives bear, can ultimately tell us if a whole-child education has been achieved.

This year, five exceptional graduating scholars from Brilla College Prep have made such a conclusion almost irrefutable. Recruiters from private high schools are practically knocking on Brilla’s door, requesting that these and other eighth grade scholars from Brilla apply to their schools.

Well-rounded hardly captures the young men and women these five scholars have become.

The five scholars you will meet below embody the character traits that make up Brilla’s “Portrait of a Graduate”; they are each dignified, balanced, expert, classical, and relational. At the same time, one of Brilla’s foundational principles is human dignity: “the special value of every human person.” This principle in particular is why we want to take the extra time to introduce you to some of our incredible scholars individually. They have all excelled academically, to be sure, but they have grown in many other areas as well.

Éva Carvallo, according to Mr. Joseph, one of the eighth grade math teachers, is “our school’s superpower.” He goes on to explain that “Sometimes people who are more artistic might focus on that passion to the detriment of their academics, but it is not like that with Éva. She pursues excellence in everything.”

Although Éva has a vibrant personality, because she joined Brilla in fifth grade and attended school remotely, forming relationships was a challenge at first. “When I was in fifth grade, I was shy and didn’t have many friends,” Éva says. “But since then, I’ve been able to grow and not only as an academic student. I began engaging more, made more friends, and grew in the virtues. As a result, I grew as a person.”

Éva credits the influence of many teachers for aiding in this personal growth. For example, while working with Mr. Rosario on The Brilla Times, Éva felt like she could have conversations with him on any topic, even when those topics led to respectful debates.

“It made me feel like my voice was heard.”

Mr. Yong, Éva’s science teacher, claims that she is one of the most capable and talented students he’s ever met. “She’s well-versed in many things outside of the classroom as well as inside of it, and she has so much wisdom for her age.” When it comes to writing, Ms. Brennan, her ELA teacher, says that Éva is “beyond her years in her ability to express herself. She also enjoys acting out Shakespeare and has that dramatic flair.”

In fact, Éva’s artistic passion is one of the traits that all of her teachers commented on. Her gifts in the arts are why she considered attending LaGuardia and Talent Unlimited, prestigious high schools with an arts focus, but she has ultimately decided to attend Stuyvesant High School, one of the top schools in the state of New York.

Éva gave an inspiring speech at graduation, living up to how Ms. Barbour, Éva’s advisory teacher, describes her in one simple sentence: “She’s a rock star.”

Cristian Guadalupe’s caring personality and gentle heart set him apart as a Brilla scholar. “He has a great personality,” says Mr. Joseph. “He makes these low-key, self-deprecating, or absurd comments that make people laugh.”

Mr. Yong describes how Cristian brought in flowers for one of his favorite teachers on her birthday, but she ended up being absent that day. With an easygoing smile, Christian turned to Mr. Yong and said, “Well, you can have them then.”

In addition to being musically gifted and dedicated to playing the guitar, Mr. Yong says Cristian is “very good at building relationships and noticing details about what people like and don’t like.”

According to Cristian himself, the relationships he’s formed at Brilla are what have had the greatest impact on him. “I was really shy before, but I learned how to connect with others. Getting to know people is something that Brilla has taught me. Not only students but teachers as well.”

Cristian says he’s grateful to Mr. Matesic for assisting him with high school placement, a journey that resulted in Cristian’s acceptance to the Kiski School, an elite boarding school in Pennsylvania, which he will attend on a full-ride scholarship worth $200,000!

It’s clear that Cristian has the skills to excel academically at Kiski, but once again, relationships remain his priority. “There will be students from around the world there. I’m looking forward to meeting all different kinds of people.”

“Brilla is like a big family,” Cristian claims, and it will be fascinating to see how he continues to grow expand his family at Kiski.

It is part of Brilla’s mission to help students understand what it means to be men and women of virtue, and Jillian Vazquez-Perez’s is a prime example of what can happen when character education is at the heart of a school community. Jillian’s teachers describe her as a hard working scholar with a kind heart and a generous “volunteer spirit.”

When asked what she’d learned about herself during her time at Brilla, Jillian replied without hesitation, “I learned that I can be very courageous.”

In the past, Jillian felt anxious about getting an answer wrong in class, but now “I can usually just be myself, and I don’t worry about other people thinking something bad. Because I know who I am.”

Such openness to growth and a willingness “to get it wrong” doesn’t come easily to many middle schoolers, and it’s one of the unique ways Jillian shines.

“Jillian is really good at asking for help and making sure that she understands,” says Mr. Joseph. “She’s good about being open about when she thinks she’s confused. She will raise her hand a lot, even though she’s not a big sharer. She advocates for herself.”

Jillian’s passionate pursuit of the arts is another way she’s developed greater confidence in herself. “Her drawings are fabulous,” Mr. Joseph notes. One of the more challenging aspects of Jillian’s application process was preparing a portfolio, in addition to submitting the usual academic material. Jillian had never prepared an artistic portfolio before, something her art teacher, Mr. Pisacano, helped her with and that made her “feel a lot more calm.”

Jillian is grateful to all of her teachers for “showing me it’s okay to be nervous and scared about applying to high school, but that it can also be very exciting and an opportunity to grow.”

With a sweet smile, Jillian adds, “I’m excited to see where I’m going.”

Recently, Jillian learned that she was accepted to and will be attending Baruch College Campus High School, an elite public high school with an interdisciplinary, liberal arts curriculum.

Mr. Joseph describes Daniel Romero as a “mathematical genius.” Not only are his math skills far above grade level, Daniel is also very creative in his math, which makes him able to see unique patterns and relationships. He is always hungry to learn more. His ELA teacher, Ms. Brennan, describes Daniel as “incredibly thoughtful. He is insightful beyond his years when it comes to analyzing a text.”

Besides academics, Daniel also has an interest in coding and in music. “He is into all types of music and is very knowledgeable about them,” says Ms. Barbour.

Socially, Daniel doesn’t need to take up the spotlight, but he comes out of his shell in one-on-one situations where his good sense of humor can shine. He is always helpful with other students and humble about his intellectual gifts.

Next year, Daniel will attend Fordham Preparatory School. Since he has attended Brilla from kindergarten all the way through eighth grade, Daniel is looking forward to the challenge of being in a new environment. “Brilla helped me be open to new ideas and learn about other people, while also being able to adapt to new situations.”

As the four scholars above demonstrate, every Brilla scholar receives an education that encourages them to grow academically, morally, and creatively. For those families who wish to add a faith component to their child’s education, the after-school program, El Camino, is where children are formed spiritually.

Caedyn Taylor has served as a humble leader in her eighth-grade El Camino class. Although she attended El Camino in previous school years, she started the program a little late this year. Yet the change in the classroom’s energy after she arrived was noticeable.

“Even if others in the class are not following expectations, Caedyn always is and the other disciples follow her lead,” explains Ms. Morgan Woods, a Seton Teaching Fellow and one of the eighth-grade El Camino teachers.

This quiet leadership style isn’t the only gift Caedyn brings to the classroom. Seton Teaching Fellow Mr. Elliot Hachey, the other eighth grade El Camino teacher, says that Caedyn embodies the virtues of perseverance and diligence. “When something is difficult, she perseveres and asks really good questions. She’s never just going through the motions and has a clear passion for the faith.”

Caedyn is also an empathetic and compassionate disciple who uses her kindness for the good of others. She’s aware of what other disciples in the class are going through. This maturity has helped Caedyn make some very wise connections regarding the Catholic faith.

“She got fired up about the Holy Trinity, how it’s a relationship—a reflection of the family,” says Ms. Woods, as well the implications this foundational Christian belief can have on our human relationships. Caedyn asks a lot of insightful questions and even talked to her mom about the doctrine at home.

Mr. Hachey notes that in the past, Caedyn had expressed some fears regarding sin and its consequences. “Ms. Woods taught her about forgiveness and how Jesus will always forgive us if we turn back to Him. Caedyn said she would carry that with her for the rest of her life.”

A well-rounded education doesn’t get much more transformational than that.

Inspired By the Mission: 12 Ways Seton Applicants are Driven to Serve

LENT: A TIME TO REFLECT