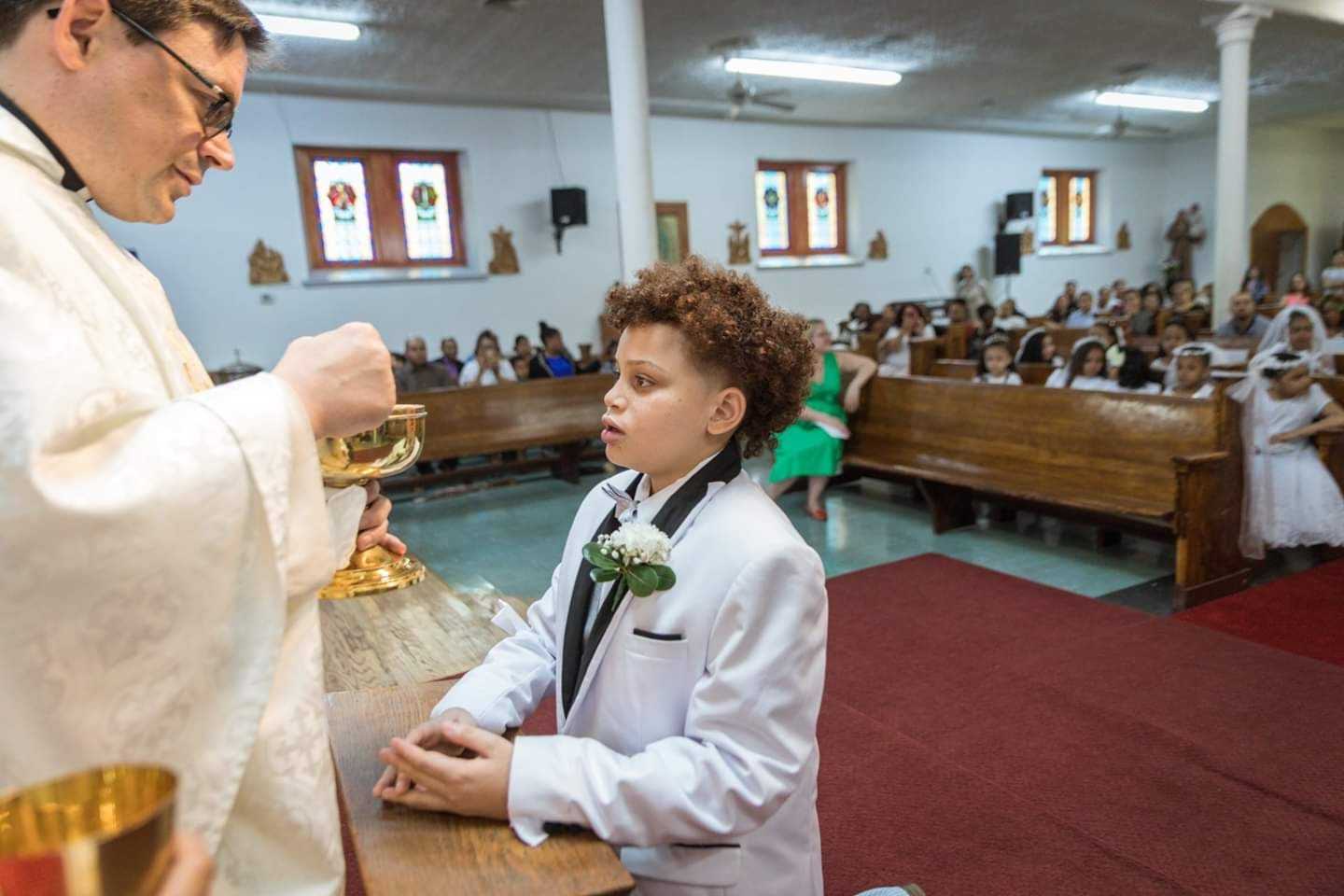 “The future of humanity passes by way of the family.” This bold statement from Saint John Paul II places immense significance on the importance of families. Is it really true? While we emphasize in our Brilla Founding Story that education is an introduction to love, we make it clear that this introduction starts and continues within the family first and foremost. While every family is unique, all families have the potential to be places where the dignity of the human person can be displayed in all of its beautiful variety. That is why our school communities believe so strongly in empowering parents as “first educators”—we want to support them in helping their children uncover their distinctive gifts so that each member of the family might grow into the fullness of who they were created to be—which is ultimately, a person who knows they are worthy of love and who is also capable of giving love in return through the many virtues they have developed, both in their families and throughout their education.  The Lopez family is one Seton family that is clearly growing in the ultimate virtue of love in some very visible, tangible ways.

The Lopez children have been part of our Brilla charter schools for many years and are a wonderful example of how “many parts”—each bringing their own strengths and virtues—can make for a shining whole that impacts those around them for good. Twin brothers Derik and Diorek (currently sophomores at Cardinal Hayes High School) began attending Brilla in fourth grade and were part of Brilla College Prep’s first graduating eighth-grade class. Their sister Rossleidys also attends Brilla and is currently a sixth grade scholar. Diogesis is in seventh grade and rejoined Brilla this fall after moving back to the Bronx from the Dominican Republic last December. All four scholars are known and loved by their teachers and classmates.

The intentional way that each child is cherished for who he or she is might be one of the reasons their mother, Leinis Santana, is able to say with confidence: “Brilla is my family.” From teachers to Seton Teaching Fellows, Leinis said that the team at Brilla communicates with her regularly and “is always in touch.” This strong sense of community helped the Lopez children first make the transition to Brilla in the middle of a school year, after their mother saw a flier about Brilla near her home in the Bronx. At the time, her children were attending an underperforming public school, so she decided to apply for Brilla’s lottery. When the boys were able to enroll, they were somewhat shy and tentative at first. Diorek was mandated for special services and struggled with reading, but Leinis claims that after just one month at Brilla, his reading ability had improved dramatically. Between fourth and eighth grade, Diorek was able to close a two-year grade level gap—something that is unusual to see in an older scholar at his grade level, as well as a testament to the care and extra support he received from Brilla’s staff. This support included but also went far beyond academics. During the worst months of the COVID-19 pandemic, when the family struggled due to loss of employment, Brilla and El Camino were able to partner with the family to secure additional resources through the Family Support Fund.

Derik and Diorek were also part of the first middle school class to go through the El Camino catechesis program and were baptized in fifth grade. They were enthusiastic founding members of the El Camino basketball team, and their mom said they began participating in the after-school program because they “wanted to be in touch with Jesus.” Kayla Keller, Recruitment Manager at Seton and a former Fellow, first interacted with both boys in their middle school science classroom and also taught Diorek’s El Camino catechism class. She remembers the twins as “such good, pure boys.” Derik excelled in school more naturally and was really skilled at basketball, but he had a fiery temper and grew a lot throughout middle school, in part by learning how to work through his anger in prayer. Academics were more of a challenge for Diorek, but Kayla recalls how he “worked so hard and sincerely sought a relationship with God, which was stunning to me”—a devotion that influenced his peers and resulted in Diorek being chosen as the first Disciple of the Week. One day during El Camino, Kayla was teaching the disciples about saints who found schoolwork difficult. In the middle of the lesson, Diorek raised his hand and asked with genuine hope and desire, “So I can be a saint like them, too?” Kayla found this response “really moving, as it helped me give greater thought to the unique struggles and gifts of the saints, and why it’s important to share both aspects with disciples so that they can see themselves. That moment made me a better teacher.”

John Lane, currently the principal of Romero Academy at Resurrection in Cincinnati and formerly the general manager of the El Camino Network at the middle school, has vivid memories of the Lopez twins as well. “They were both sweet boys who were always at El Camino and really engaged with their teachers. They had some challenges at first, but they showed a lot of growth.” As older disciples coming into the Catholic faith, John remembers how they asked really good questions and demonstrated a deep love for God. When John headed to Ohio to open Romero Academy in 2020, Brilla students were still participating in remote learning due to the pandemic, so he wasn’t able to say goodbye to Diorek or Derik in person. However, John returned to the Bronx to witness the twins receive the Sacrament of Confirmation (the first El Camino class to do so) and was overjoyed to see them again “as grown men.”

“They are taller than me now,” he added.

Kayla also ran into Derik and Diorek toward the end of their first year of high school at Cardinal Hayes, an academically rigorous, all-boys Catholic school in the Bronx. When she asked if they were looking forward to summer vacation, Kayla was amazed and delighted to hear that the twins did not want their freshman year to be over yet! This year, the twins are playing varsity football and their mother says they are doing well in high school overall. She never receives any calls about their behavior from the school and says they are very self-motivated when it comes to academics—she has no complaints about their grades, but their schoolwork is also something they are owning for themselves. This kind of independence and responsibility started even before high school, as they both applied to the Cardinal Ambassador Scholarship from Seton and Student Sponsor Partners Program founded by the late Peter Flanigan. Their courage and hard work was rewarded, as they attend Cardinal Hayes on a 95% scholarship. The holistic growth Derik and Diorek experienced spiritually, academically, and relationally during their time at Brilla is clearly evident in the well-rounded young men they are becoming, but it is also beautiful for their former teachers to witness how they are becoming even more fully themselves. John and Kayla both noted how different Diorek’s and Derik’s personalities are, and how each brother embodies virtues that almost seem to balance those of the other twin.

“Derik was a hot head,” John said affectionately. “He has an immense sense of justice and courage. It’s incredible to see those virtues channeled into positive things.” One of those “positive things” was basketball, and Derik was named MVP—Most Virtuous Player of the Year—for the incredible growth he demonstrated in teamwork and sportsmanship. Diorek, on the other hand, is an excellent example of a person who seeks to grow in wisdom. John remembers him as a highly empathetic young man who was often in touch with what both his teachers and classmates were feeling and was able to respond appropriately and with compassion.

Rosselydies Lopez, currently a sixth grade scholar at the middle school, also expresses unique virtues, ones that are different from her older brothers but no less important. “It’s a virtue that’s not talked about often enough, but Rosselydies radiates affability,” Kayla explained. To be affable means that Rosselydies is friendly and approachable. “She’s delightful and a joy.” Warm, spunky, and gregarious, Rosselydies is well known by many Seton Teaching Fellows, even if they haven’t taught her personally.  Olivia Polk, a Culture and Formation Lead at Brilla who teaches Rosselydies’ cosmetology elective, mentioned how Rosselydies is extremely welcoming and kind. “At one point there was a girl who was ‘kicked out’ of their friend group, and Rosselydies went out of her way to make sure she was brought back in. She works really hard to make people feel included.”

At home, Rosselydies shares a room with her half-sister Diogesis, whose transition as a new student this year is going well. “My grades are beautiful,” Diogesis claimed with confidence. She enjoys school and said that the virtue she is trying hard to develop is courage. Diogesis’s teachers recognize this virtue growing within her, as it does take tremendous courage to attend a new school in a different country, far from other members of your family. Although most of Diogesis’ teachers are still just getting to know her, the learning community is delighted to have her at Brilla.

Leinis Santana—“the super mom of El Camino” according to Kayla—is also a beloved presence at Brilla who frequently attends basketball games and school events, for which she often volunteers and cooks. When asked why she gives so much of her time to the school, Leinis responded enthusiastically, “Because they are so good to my kids!” Her children are also good to the school, and they bless the entire community with their example of what it looks like to be a cohesive and closely-knit family. “Derik and Diorek are great big brothers,” Kayla noted. She explained that the siblings even call each other nicknames in Spanish which essentially translate to: “You’re so close to me that you’re in my bubble.”

Indeed, to witness a family of so many personalities and talents, where virtues like courage, wisdom, justice, and affability are able to flourish, is a gift of love to us all.

The Transforming Effect of a Mother’s Love

Giving More of Myself to My Brothers: Interview with Mr. Castaldi