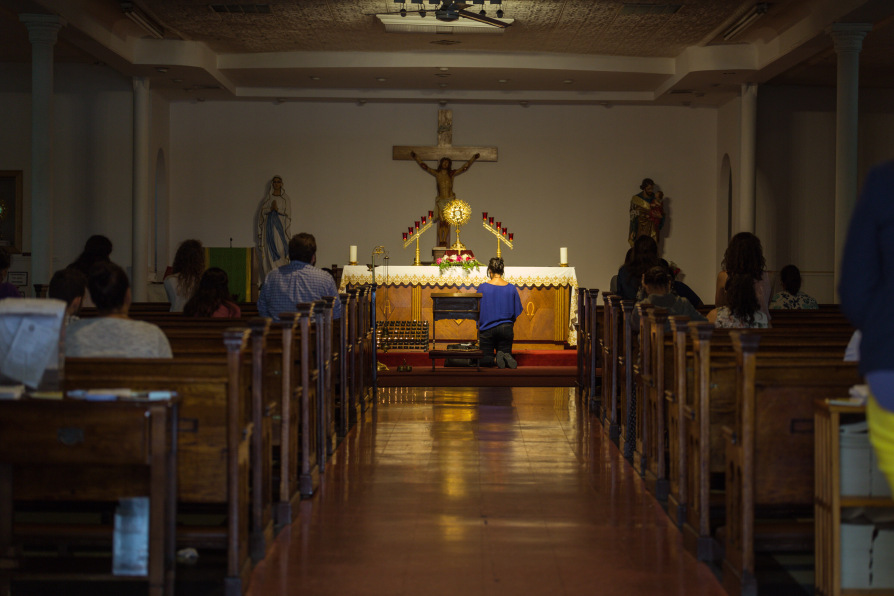 My nose told me that much. It was dark, the eyes in my head told me all dim except for the light shining on the body of Our Lord.

There was more I could see. The nave’s ceiling was shabby, its leather kneelers were worn. The floors were scuffed and scratched, the pews sparsely filled with the vague, hunched shapes of men and women.

All was still and silent, each of us was struggling in our own way to pray, to not just think about praying, to talk to God, not about him, not about ourselves. The footsteps that came cut the calm, and the monologue in my mind. They were fast but not rushed. The priest strode down the center aisle. He knelt in front of the sacrament and (my ears told me) sang.

His baritone voice, warm and full, took me by surprise. I did not know the words chanted in the dark (I am a convert with many prayers to learn). But I saw the way he looked at Jesus Christ, heard the way he sang about his Savior, and mine. I admired him.

I looked down the row from me and saw my brothers. We had spent two weeks together in quarantine, beginning our missionary journey together prostrating daily before our TV. My Jesus, I believe that You are present in the Blessed Sacrament, but not in the pixels of a screen—it was the best feeling to be with him again.

I saw each of their faces, these bowed heads I had prayed with for weeks on Zoom, these men I had committed to love, laugh with, and serve. I saw their faith and thanked God for the ways they had already encouraged me to turn to Jesus, and for the ways they would.

I turned my head and saw my sisters in Christ, the women who lived beneath our apartment. They blessed us with kindness and humility. They turned the house we had been given, with its occasional resident mouse, its clogged drains and hardwood floors, into a home. Our fellowship, the ten of us, is far greater than the sum of our fractured pieces, knit together in Christ our head.

I looked around the sanctuary and saw the hunched Hispanic mothers with their faith I’m sure would move mountains, if they needed moved. I saw the middle schooler who shifted uncomfortably in his seat, dragged to church but trying to clasp his hands for God’s (for mom’s) sake.

I heard Jesus’ promise of presence with the two and the three, knew He was sitting in the empty seats, and on the altar, too.

I bowed my head and gave God thanks. I was not supposed to be here. A few months ago, I was an Anglican seminarian who felt God tugging him across the Tiber. Even when my Catholic convictions became concrete, with the world and its tossing and turnings, I wanted to run from this mission with Seton that I had found on a Googled whim.

In many and various ways I had tried to run from the South Bronx—to escape what the Lord seemed to be calling me to do, to offer a year of mission in New York City. I knocked on many doors, some urgently, frantically, as the past months progressed, to do something (at times, anything, Lord!) else.

I know that He has been, is, will be present with us this year, because He promises to be—with the meek, the weak, the poor in spirit and in means.

It is a fearful thing to glimpse the face of God, but I still find myself squinting, straining every day for him in my home, in my school, in the streets of the South Bronx. You don’t have to look hard to find Him here—He is nestled in the wrinkles of the faithful mother’s brow, in the frown of the child who can’t figure out their math problem, in the teacher who bends beside them to help them count.

I think that you need to come and see Him here, for yourself.

Matt Lines is an Operations Fellow serving at Brilla College Prep Middle School in the South Bronx. He received a B.S. in Political Science at Geneva College, and studied Divinity at Trinity School for Ministry.

Answering “Will God Go Grey?” – The Work of a Seton Teaching Fellow