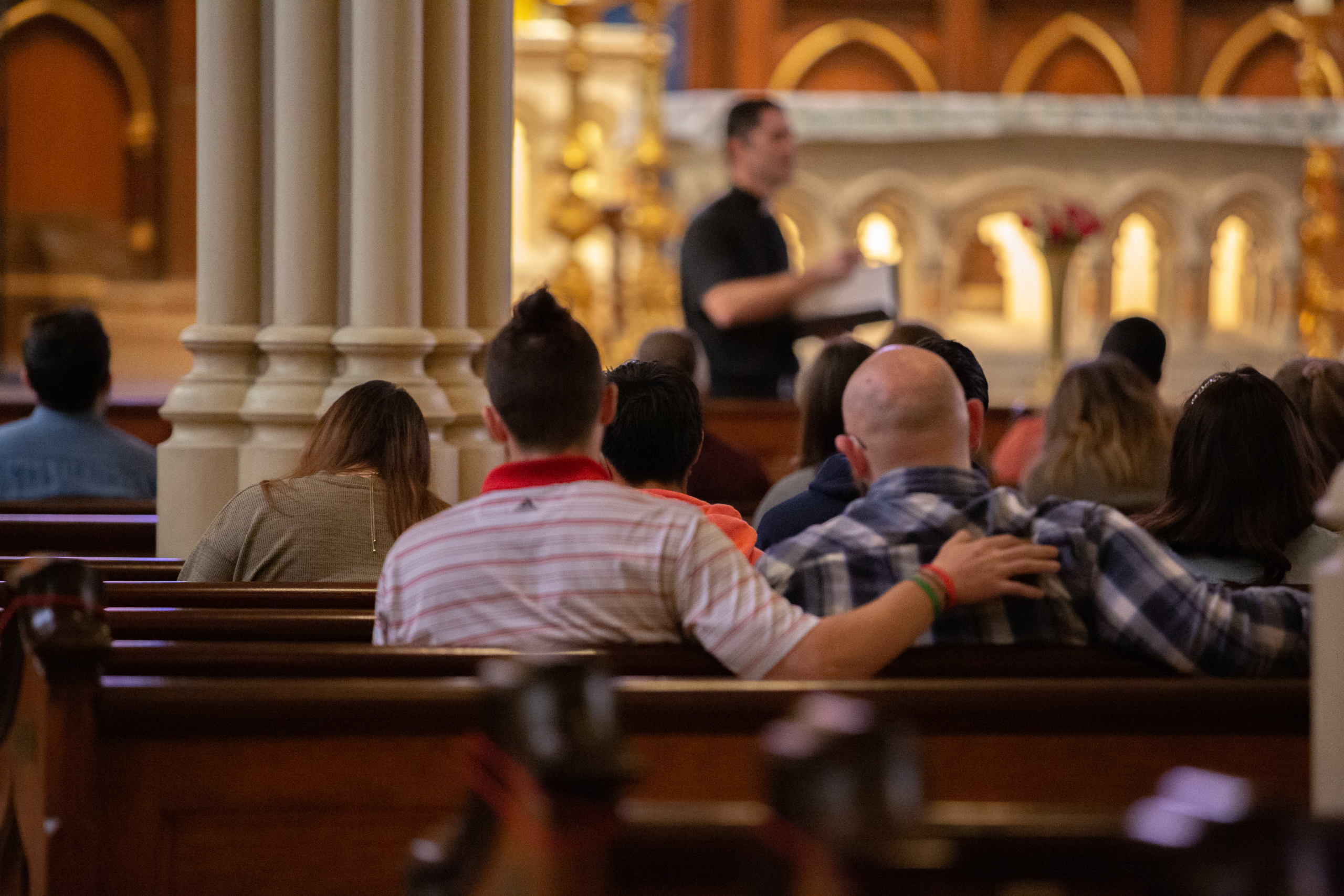 This article from former missionary and current STF recruiter, Jacob Coonradt, shares musings on the spiritual importance of living out a mission. Young men have a natural capacity for spiritual fatherhood, and they draw themselves and others closer to God when they serve, whether with a program or otherwise.

This reflection is for the young Catholic men out there who are wondering whether they should (or even could) find time for a mission (in its many applications) after college. It’s a meager offering, but I’d like to share some things I’ve learned about the gifts that young men have to give to others, and the gifts they receive from mission. I presume there’s still some wisdom in here for young women to take away, and they’re certainly welcome to enter into this reflection, but it’s not written for them because, frankly, women are naturally better at giving of themselves than men, and I don’t think they need a reflection like this.

This obviously isn’t to say that men don’t have the Christian capacity to give of themselves— in fact, the ways that they can give to youth and their peers are so special and powerful that it sits distinctly apart from the feminine genius—however, men have a much greater tendency to turn to themselves rather than others, and they don’t always see the beautiful gift that a year of mission can be.

I’d like to share this thought: men have a God-given capacity for leadership and they exhibit a natural authority. This is evident in the special role that men play as fathers and husbands in a family structure. Being a husband is a specific temporal relationship that is tied to the vocation of marriage (and echoed in others), but fatherhood actually exists outside of marriage. In fact, I’d argue that spiritual fatherhood is a reality of every vocation and stage of discernment, including the single life.

Spiritual fatherhood is a reality of every vocation and stage of discernment, including the single life.

A young, intentionally Catholic man might find himself discerning between the vocations of marriage, religious life, and the priesthood, but that doesn’t mean he has no capacity to give as a spiritual leader before acting on and pursuing a vocational calling. Acting as an older brother, serving youth in his community, and walking alongside his peers as a witness of authentic faith, are all ways that a young man could engage in spiritual fatherhood. For those men who feel called to the beautiful work of education and formation, the chance to lead as a witness is even more efficacious.

You’ve probably heard this point bemoaned in many circles, but the modern world is experiencing a lack of authentic, Christian manhood. Male role models are few and far between, and the degradation of marriage has left many children without a full-time father. Rather than complain about the obvious, I think we should hold ourselves accountable to serving as spiritual fathers anywhere and everywhere we can. This means that the aforementioned chances to serve as a witness and role model are all the more impactful because of the reality in which children are being raised. It’s not easy work, but a young man who chooses to serve in a classroom has at least forty hours a week in which he gets to show girls and boys what a virtuous example of Catholic identity looks like. How much more powerful is this example for children who grow up in broken family structures, or who don’t have a relationship with their father?

Many men consider how they might give in light of the world we inhabit, but ultimately choose not to do so. I think fear plays a large role in that choice. If you’re one of the people feeling swayed by fear, here is a secret: the authority and transformative witness of Christian manhood is a God-given gift; it doesn’t require anything on our part. It’s as simple as showing up. Just be present. It’s that easy.

The authority and transformative witness of Christian manhood is a God-given gift; it doesn’t require anything on our part.

If that is the case, why then are we experiencing a cultural crisis around manhood? This is a bit of a generalization, but in essence, it’s because guys don’t like to show up. We’d rather stay home. We’d rather go out with friends. We’d rather have fun. We have our hobbies and passions to pursue, and we so easily define success in the world as the extent to which we pursue and make money off of those passions. We just need to work on ourselves for a while, okay? Simply put, it’s really easy for us men to say no and to find a false reality to pursue rather than the people in front of us. God gave us a gift in natural authority, and that requires extreme responsibility, but one of our greatest temptations is to simply eschew that authority in favor of doing what we want.

A cursory glance at some well known passages from scripture highlights this. Look at man in Genesis, living in the Garden of Eden. Eve certainly plays her role in mankind’s fall from grace, but the mistakes made by Adam allow temptation to enter the garden in the first place. Adam was charged with the responsibility of protecting the Garden, knowing and stewarding its life, being a companion to his wife, and guiding his family in service towards God. When the devil enters the garden and finds his wife alone, Adam has already failed. It’s true that man’s original sin is direct disobedience to God when he eats forbidden fruit, but his first mistake is leaving his mission and eschewing his responsibility.

The great King David struggles mightily against this temptation too. A man after God’s own heart, David proves himself to be a wise and noble leader who puts his people first on many different occasions. He has a mission from God, and when he’s on mission, he truly pursues the good. However, David slides into mortal sin when he rejects this mission.

The first few verses of the Davidian story surrounding Bathsheba and Uriah the Hittite tell us everything we need to know about the occasion of sin: “In the spring of the year, the time when kings go out to battle, David sent Joab with his officers and all Israel with him; they ravaged the Ammonites, and besieged Rabbah. But David remained at Jerusalem. It happened, late one afternoon, when David rose from his couch and was walking about on the roof of the king’s house, that he saw from the roof a woman bathing; the woman was very beautiful. David sent someone to inquire about the woman.” (2 Samuel 11:1-3). Even before the act of adultery takes place, we find out that David has abused his power and responsibility. At a time when a leader should be out at the front of his people, he stays home. David sends the whole nation out and puts his best man in his place. During the day, he isn’t serving as a leader or administrator, he’s rising late in the afternoon following a day of kingly lounging. When he spots a beautiful woman, he lets his curiosity arise, and he sends someone else to fetch her for him, abusing his precedence for personal gain.

Everything David does in the following chapters is a perversion of the mission and responsibility he’s given by God. His choices lead to a heart-breaking abuse of relationships and people, and it all starts because he’s not on mission. Many of us know this story well, but we rarely reflect on how David’s circumstances lead him to sin, and even fewer of us take the time to hold up this story to ourselves as a mirror. David is a mighty and God-fearing man, but he falls when he takes his eyes off the Lord and his responsibilities; rather than judge, we should see ourselves in this scripture.

These stories bear import to the lives of men and women today: in a time and place where young people are struggling with explicit habitual sin, a mission is a chance to rise out of yourself and serve—it’s a gift not only for those who receive, but also for the one who gives of himself. So, for all of the young men who grapple with their identity, who feel trapped by lust, who struggle with sobriety, who fall into despair, who have no guiding star and are moved by their passions, who wish and pray desperately to live like Christ yet constantly deny Him, know this: you have to move beyond yourself. Serving others is a beautiful chance to grow and find real happiness, even if it seems terrifying and inconvenient.

In a time and place where young people are struggling with explicit habitual sin, a mission is a chance to rise out of yourself and serve—it’s a gift not only for those who receive, but also for the one who gives of himself.

As you decide what your college and postgraduate plans look like, I invite you to think about how you can serve others, and how you can deny yourself so as to advance God’s kingdom. A comfortable remote job isn’t going to challenge you to be a better Christian. Trading principles for high-paying work isn’t going to sanctify you. Playing it safe won’t cultivate virtue. Choosing your hobbies over people who need to know Christ won’t dispose you to holiness. Retreating inward will only further trap you in habitual sin. And above all, know that when we stand before God and feel His judgment, He will ask for an account of our gifts and talents, and chief amongst those gifts is the authority conferred by Christian manhood. Despite what we may tell ourselves, God won’t look at our talents and judge us for not having made more money, for not being more famous, for not having turned our pop-culture passions into a career success, for not having become a professional athlete, or for not having traveled the world. I think when we stand before our maker, He’ll draw up the faces of all the people we could’ve loved better and ask: Why didn’t you bring Christ to them?

I’m not saying that everyone needs to be part of a programmatic Catholic mission, although there is certainly room and need for many more to do so. Really, I don’t know what your mission is. You do have a mission though, and it might not be what you wanted or expected. I invite you to pray on it (you’ve probably spent enough time thinking about your future). When you find it, you’ll realize how much your spiritual life has needed it. If you’re not sure where to start looking, then reflect on this musing from Pope Benedict XVI: “The world offers you comfort. But you were not made for comfort. You were made for greatness.”

So, pray and meditate on the good that could be done by giving up a year or two of your life to serve as a missionary; and remember, the gift is yourself, not what you possess.

Looking for a mission? Why not discern with Seton Teaching Fellows! STF is helping young men and women to radically serve as Christ the Teacher. There’s no fundraising or experience required—only the call to serve. Sign up for a brief info call with our recruitment team today.

Building the Mission at Romero (Part 1): An Interview with Assistant Principal John Lane

The Cult of Efficiency

Cultivating My Small Field for Christ