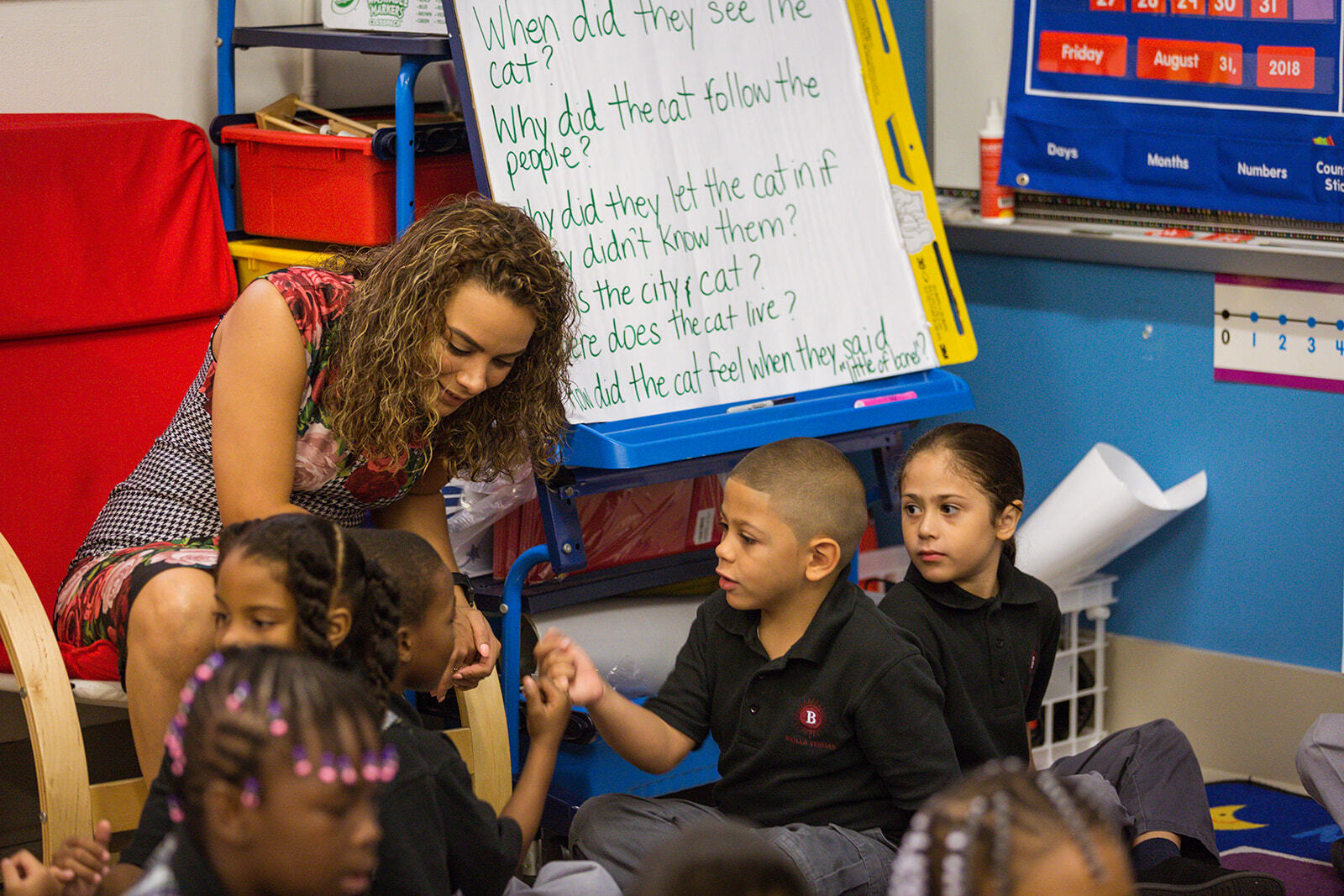 Zoranlly Burgos has been an integral part of our Bronx-based Brilla Schools Network since it’s founding 7 years ago. She spent 3 years as founding principal of Brilla Veritas in the South Bronx, and is now founding Brilla Caritas in the North Bronx. As principal, this is her 4th year of managing Seton Teaching Fellows. We sat down with her to talk about her experience as an educator, why she works at Brilla, sending her own children to Brilla and El Camino, and her vision for the STF’s that serve in her school.

First off, we’d love to hear your short bio. Where you grew up, your history as an educator, and a short “why Brilla.”

I was in the DR, came to the Bronx New York when I was 6 year old, and i’ve been here ever since. The Bronx is very dear to me. I knew very early on that I wanted to be in education, mainly to be a teacher, because I was a teacher’s pet. I have been working with kids ever since I started working for Kaplan as a tutor at 16. When I started applying to college, I found out that I was illegal, and I didn’t have the option to go to any college I wanted. Even though I did everything the right way: I did 2 sports, and got great grades, I was building up my resume to get into any college I wanted, being illegal really prevented me from going to any school. Luckily, though, I was able to go to City College here in New York City, and then I joined Teach for America (TFA), which was my means to get into education.

TFA originally placed me in Kansas City as a high school Spanish teacher. However, I requested to stay in New York, because that’s where I was from. I was then placed at a charter school in Harlem. The staff culture there wasn’t for me. Also, I was having children, and the work hours were very demanding. Mrs. Fernandez, who was also a corps member of TFA told me about Brilla, I was very excited to be a part of the founding of something new. The other school I worked at was being founded when I joined, but I wasn’t 100% aligned to the mission. So with Brilla, not only could I be part of the founding, but also be 100% mission-aligned. Furthermore, Brilla is in the Bronx, and I was excited to be serving my home.

I stuck around because at Brilla, we care about people as humans. It doesn’t matter what role, a child, an adult, operations, a classroom teacher, fine arts, or custodial. It doesn’t matter who you are, we treat everyone as a human and honor their dignity beyond the 9-5.

The Brilla school that you are the founding principal of has a unique name: “Brilla Caritas” and its own mascot, a cardinal in the Brilla Bird Family named Nicky! What is the story behind the names of Caritas and Nicky?

We needed a Latin name, and Caritas was the top option. There were 2 options for the two new schools, Pax and Caritas. Pax fits better with Shingi, and Caritas fits better with me. My role is to be a servant leader, for our school to give back to the community. That’s where charity comes in: that’s why we are here, to love and serve, whether in school or in life, we are here to support our families.

Nicky- was a name that I wanted for awhile. The building we are located in is called St. Nicholas of Tolentine. I named Rita, Brilla Veritas’s mascot, before I knew that the building that it would inhabit would be called St. Rita’s. I believe everything happens for a reason, and Rita was named 2-3 years before we knew we’d be in the St. Rita’s building. This time, I wanted it to be the same thing, but this time obviously intentional! I wanted the mascot to be a girl and to have curly hair to reflect me, and her name is Nicky, to reflect the name of the school that was here before: St. Nicholas of Tolentine. Caritas will be in the building long term, so the name of Nicky was a “tip of the hat” from me to pay respect to the school that was here for many years before.

Your kids attend Brilla Schools in the South Bronx and the El Camino after school program.  As a Brilla parent, what is special about Brilla and why do you choose to send your kids to El Camino?

Oh the Brilla parent side, I always wanted to work at a school that I would feel comfortable to send my kids to, and that’s something that I found here. Brilla has very high expectations, and my children are academically performing really well. That’s really exciting for me, and if ever they struggle, the teachers always let me know. There’s a ton of communication that happens between teachers and I. That’s the academic piece, but there’s also the character piece. We care about children beyond just readers and mathematicians, we care about them as humans, and teaching them what is best through virtue education. This is a calling for me. I also know the curriculum well, I know how we differentiate, and all those things are important for my children. I like how there’s no behavioral system, there’s no “red green yellow light behavior chart.” Children are meant to be children. Using Love and Logic allows children to be children, and to make mistakes, and to learn from those mistakes instead of being punitive. My children definitely flourish in this kind of environment. Everyone works in the best interest of the children, and that’s super important.

For El Camino, I am Catholic, and I definitely want to make sure my children get everything they need, especially when it comes to the sacraments, getting Baptism and communition. Also, making sure that they understand about God, about that relationhsip, and how important it is. This ties into our character education as well. In El Camino they’re learning how to be students, good humans, and how to have a relationship with God. I don’t have the hours in the day to be able to provide them this if I wanted to. Given my work hours, I couldn’t take my kids to a CCD program, so it’s nice how this is an extension of theirBrilla day. It’s also nice how the teachers are the same during school and after school.

One of the things that’s really special about Brilla is its emphasis on school and staff culture. Before this year as the founding school leader of Brilla Caritas in the North Bronx, you founded Brilla Veritas in the South Bronx and were well-known through our Network as having both a  passion as well as a talent for fostering school culture! How do you hope to bring what you cultivated at Veritas to Caritas? What’s your favorite Brilla tradition?

I think the beauty about founding, is that it’s all hands on deck. Everyone who was hired truly 100% wants to bring the mission to fruition. Culture-wise I want to make sure all stakeholders are flexible, show growth mindset regardless of who they are in the school and what role they play, and are continually growing as people. Also that they’re finding joy in learning, and joy in education. We’re all lifelong learners! I want my school to be open, flexible, positive, and to make sure that we’re finding solutions to problems instead of dwelling in them. This is something I hope to be doing with new people, new students, and new families. We also have to be reflective about the fact that the demographics, the dynamics of the families, students and staffing is very different.

My favorite Brilla tradition, there are so many… is the Roosting Rallies. It’s a time every week to get to see the children excited about being in school, and having so much school spirit that it comes out of their pores. It gets me really excited to see the scholars chant for their homerooms, know the virtues, and to be excited to learn about the scholar of the week. I love seeing the families there and seeing that they have bought in to Brilla.

There will be 5 STFs serving at Caritas this year! What is your vision for them? How do you see them contributing to your students’ learning and development as well as to school culture as a whole?

I think very similarly to the staff. Fellows are definitely excited to be in the school and to serve. That’s what we all do, whether we get paid for it or not. This is the work that we do because we love kids, we love humans, and we love to give back. As principal, the vision that I have for my fellows is no different than the vision that I have for my staff, my teachers. We’re all here to learn, to give back, and to make ourselves and others better in the process. Sometimes it will be hard, and sometimes it will be easy, but we’re all here for each other. The great thing about the fellows is that they have their own community as fellows, but they also have the Brilla community that they are deeply a part of.

How do I see them as contributing? No differently than a teacher. Students are the drivers of their learning, and Fellows get to be a part of that. Their role in supporting students is no different than the full-time teachers on my staff.

The God in My Belly Button

“Come After Me, and I will Make You Fishers of Men:” A Reflection on Seton Teaching Fellows