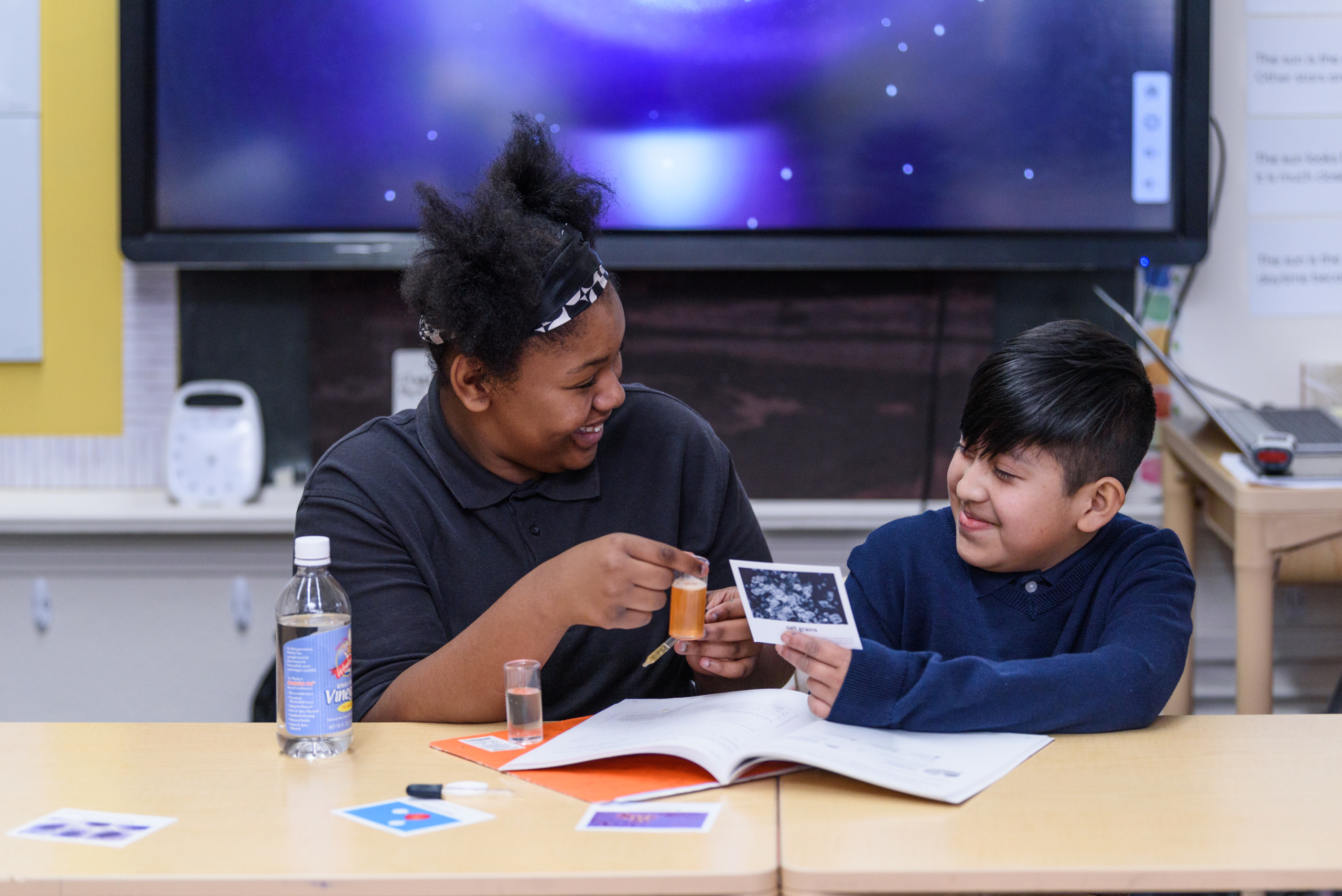 “Dantoria walks around the school like she owns it—in the best possible way,” says Ms. Shannon Thomas of her soon-to-be goddaughter. “When she’s not here, you can sense it.”

For Dantoria Johnson, a sixth-grade student at Romero Academy at Resurrection in Cincinnati, Ohio, school has become a second home. Nearly two years ago, Dantoria’s grandmother chose to have her granddaughter change schools because she was concerned that Dantoria wasn’t being challenged to reach her full potential at her former school. Since making the switch to Romero, Dantoria is excelling in her classes and enjoys reading more, but the changes also go well beyond academics.

Opinions on the kinds of topics that matter most, but that aren’t always discussed at school in meaningful ways—if at all. “Dantoria’s mom passed away when she was five,” Claire explains. Before Dantoria started attending school at Romero, she really missed her mother and seemed somewhat depressed. She still misses her mom, of course, but now Dantoria “talks about the Bible a lot. She understands death more and knows that her mom is a child of God. She knows that Jesus took her mother home.”

This May, Dantoria will “come home” in another way—she will be welcomed into the Roman Catholic Church through the Sacrament of Baptism, a journey taken with the support and mentorship of two Romero teachers who will also become her godparents.

Alex Rodriguez is a former Seton Teaching Fellow who now teaches as a Flex Faculty member at Romero Academy. When Dantoria asked him to be her godfather, he told her that the role of godparent isn’t to be taken lightly and that he would have to think and pray about it.

And how did Dantoria respond to this bold offer of belonging?

“She looked me in the face and told me that she knew all that, and that’s why she asked me to be her godfather.”

Shannon Thomas noticed the same level of maturity in Dantoria when she asked her to be her godmother. “Seeking baptism in sixth grade is a huge deal,” Shannon says, given where most students are socially and developmentally. Yet Dantoria walked into Shannon’s classroom “loud and proud,” asking her beloved teacher to be her godmother in front of all of her peers.

Shannon’s reaction? To start, she had to stop herself from crying with joy, and then she told Dantoria she would need to call her grandmother and ask permission. Though Dantoria’s family is not Catholic, her grandmother agreed that she could receive the sacrament.

“When Dantoria puts her mind to something, she goes and does it,” her grandma says. “She’s always been a refreshing child to me. She’s an inspiring little girl…she’s been that way ever since she was a baby.”

In order to prepare Dantoria for this life-changing moment, Shannon offered to start taking Dantoria to Mass each Sunday. When Dantoria began asking about different types of parishes, Shannon had the idea to take her and a friend to a variety of churches around the city; that way the girls would have more exposure to beautiful architecture and the richness of the Catholic tradition.

The girls loved their ‘church tour of Cincinnati,’ but they also never lost sight of what matters most. “You don’t need a big church,” says Dantoria. “You just need a place to talk about God. All you really need is a place to take the bread and wine.”

The bread and wine, in fact, is what Dantoria is most looking forward to about becoming Catholic. “I’m excited to take the Eucharist and see what it will do for me.”

Such thoughtfulness is surely due, in part, to the excellent catechesis Dantoria has experienced in her classes at Romero Academy and through the love of her godparents. Dantoria says that her religion class opened her eyes and helped her start a new chapter with God. “I want to be closer to Him,” Dantoria realized after learning about what Jesus went through. “Jesus dying on the cross is really inspiring to me because He really loves us. Even though He knew we would sin, He sacrificed for our sins. And that’s really heartwarming to me because it says that He really loves us.”

Dantoria has also found an inspiring role model in her godmother, Ms. Thomas. “She’s the main reason I want to be baptized,” Dantoria says. “She will be there for me. Even when we make mistakes, she’s always there to talk to us. Even if she’s hard on you at times and gives consequences, you know she wants you to be great.”

Greatness is certainly a worthy goal at a school that seeks to inspire its students to, in the words of Saint Oscar Romero, “be more.” And Dantoria is pursuing greatness in everything she does.

Alex Rodriguez recognized Dantoria’s ability to push herself right away. “She was always paying attention and always had the answer to my questions,” he says. “She recognizes a lot about herself; she’s very good at being introspective and recognizing things she needs to work on.”

Yet Dantoria is also the kind of student who is unwilling to leave others behind in her quest to be the best she can be. While a student in Mr. Rodriguez’s class, “Dantoria noticed early on that some of her classmates were a bit behind on their work and knowledge, and so she would work a bit faster, to be able to help her classmates who struggled with pacing or attention span.”

That compassion and motherly care were some of the first virtues Shannon noticed in Dantoria when, as a Kindergarten teacher, her class was paired up with Dantoria’s fifth grade class to attend Mass during the school week. The older students were tasked with helping the younger students pay close attention while in church, and Shannon was struck by the way Dantoria always put in extra effort, going so far as to volunteer to sit with two kindergartners instead of just one.

“She has a lot of grit and drive—which you can’t really teach ten-year-olds,” Shannon says.

Claire Johnson agrees, claiming that Dantoria is the kind of child who will decide she wants to make a certain dish for dinner, go look up the recipe on YouTube, and then ask her grandmother to get her the ingredients. “She says to herself, ‘I’m going to do this’…and she does it! She cooks and helps take care of me.”

Taking care of others seems to be hardwired into Dantoria’s character. “Whoever Dantoria is sitting next to in class,” Shannon says, “that student will follow her lead.”

And her peers have taken note of Dantoria’s leadership. When asked what virtues Dantoria exhibits most, her classmate Ma’Shiah says, “Responsibility; because she is always the lead of projects and never a follower…At recess right now, she’s teaching the fifth grade girls how to dance.”

Her classmate Amir adds, “Kindness; because she is nice to everyone and always gives people stuff and shares and helps others. She’s also always respectful.”

Both of Dantoria’s godparents are thrilled about the significant and positive impact she is having on her classmates.

“She is a very mature young lady who has been tasked with leading those around her, and I believe she recognizes that, and acts accordingly,” says Alex. Dantoria was even named the first trimester MVP—Most Virtuous Person—for the virtue of Faith for the entire school.

When she first met Dantoria during her fifth grade year, Shannon instantly recognized that there was something very special happening inside of this young student leader. In fact, when Shannon was discerning if she wanted to continue teaching Kindergarten or become the teacher of a sixth grade classroom, Dantoria played a major role in her decision to change grade levels.

“We had an instant connection. There was a pull on my heart to be her sixth grade teacher. I knew Dantoria wanted to be baptized. She just needed the preparation.”

Given these devoted and intentional mentors, it isn’t hard to see why Dantoria thinks “All the teachers [at Romero] are amazing. They all play a special part in my life.”

It also isn’t hard to see how Romero Academy has become part of Dantoria’s extended family and a true place of belonging. “Last year, I was really scared because I was new to the school and I didn’t really know anyone.” Fortunately, Dantoria’s fears quickly subsided once she saw how both her teachers and classmates were filled with love.

“People really care about us at this school,” Dantoria says. “I knew this was the place I wanted to be.”

And the community of belonging at Romero Academy knows it is blessed to have her.

What Does it Mean to be a Teacher? A Meditation

From Fellow, to Teacher, to Aspiring School Leader: An Interview with Spencer Garrett