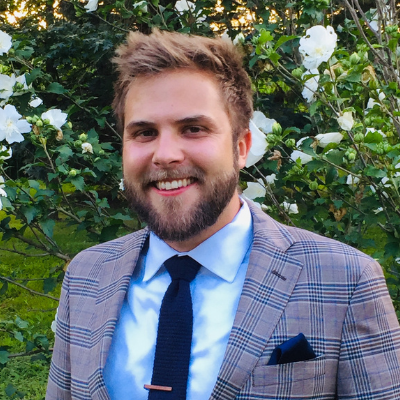 A big part of what we do in our Seton Teaching Fellows recruitment is getting out on the road and visiting college campuses and parishes around the United States. We do a lot of flying, but if you plan a regional trip well, then there’s also a lot of driving. Last September, a colleague and I made a recruitment trip to Oklahoma and Kansas—so, big open plains and plenty of road in between. We had a great time, but it was a long trip, and with a long trip you worry about whether your efforts have been fruitful or not.

This was an interesting set of college visits because it was the start of the 2021 Fall semester. This was really the first year where students and staff were back 100% in person since March 2020. It was also the first time the STF team had been back on the road for in-person events since the pandemic started, which was exciting.

We met tons of great people, shared the mission everywhere we went, and connected well with staff and students, but we hadn’t had as much luck reaching upperclassmen, specifically seniors who might be interested in Seton’s mission. We had talked to some campus ministers, missionaries, and priests, and the general consensus was that upperclassmen hadn’t been as involved in campus ministry and communities of faith at college. A lot of students had checked out or disconnected from the community over the last two years.

Honestly, it was a little discouraging. Partly because our job is to recruit these students; but, more than anything, it just hurts to see empty pews in a beautiful Church when you go visit a state school with tens of thousands of students. You just have to wonder where everyone went.

We recruit people who love Christ and want to be His hands and feet in the world. But witnessing so many empty pews was a stark reminder that we are doing so in a world and culture that places a great deal of things before Him. Now, there are amazing things happening in the Church and in the hearts of young men and women everywhere, so this is no call to despair, but I was feeling a little down as we rounded out our trip.

We were closing up our fifth and final day of travel as we headed to KSU in Manhattan, Kansas. We arrived early and stopped in at the Catholic student center, St. Isidore’s, so we could pray and set up for a presentation we had planned. My coworker and I talked with a few different students who were in the area and I asked if the student Mass would be busy that night. A few students confirmed my fears and told me that the crowd was always smaller for this Mass: it was a Wednesday night 9:09 pm service. We had received permission to give a brief announcement at the end of Mass, but I felt like there wouldn’t be anyone to hear it, and I had really been hoping for something special on our last night of recruitment.

And I was wrong. Something good is going on at St. Isidore’s (if anything this reflection is for them) because their version of low attendance at daily Mass is over a hundred college students.

We went down to the basement for Mass and were lucky to find seats in the front (I guess their busy Masses are standing room only). Students had been praying there and in the chapel beforehand, attending Confession, and a number of them were coming out of Bible studies in time to make it to the 9:09. The Mass was well attended, our announcement was well received (consequently, our presentation was well attended), and many students wanted to learn more about the mission. I met so many students who were choosing to participate in their faith in a dynamic way, and they were doing it in secular schools of their own accord. It was sincerely refreshing.

This experience, as well as others I’ve had at similar schools throughout the year, has really refreshed the way I view young people in the Church. We’ve seen, met, and interviewed with so many awesome women and men who are living out their faith in secular environments. More than that, their faith is powerful and intentional because they have chosen to live it out in a world where others are rejecting it. We don’t always see it, but when we do it’s powerful; and yes, there’s a lot of empty spots in the pews out there, but the spots that do get filled are worth rejoicing over all the more.

The Proof that Catholic Schools Need

A Look Back at Seton’s Innovation Featured in the News