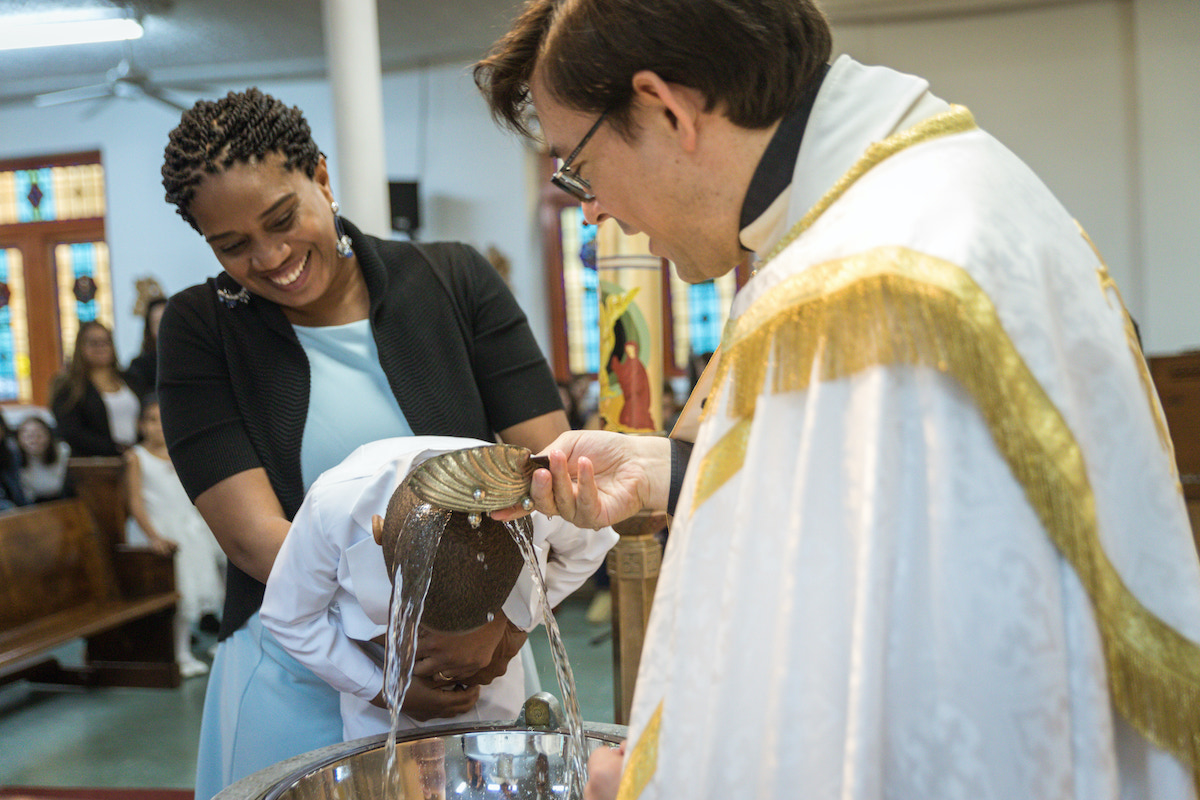 You read that right. Fifty-two.

After a recent celebration of Baptisms and First Communions in the South Bronx this past October following a six-month delay due to COVID-19, we knew we had to learn more about this godmother to so many future saints.

Yeime Valle, mother of six, is the perfect combination of grit and love. Coming upon her eighth year at Seton, now leading El Camino and Seton Teaching Fellows as chief of programs, Valle commands attention with her thousand-watt smile, incredible enthusiasm, and complete commitment to service. When you hear her talk about Seton’s programs, you’re captivated.

El Camino is Seton’s after-school faith formation program for students in the Bronx, New York. El Camino, which means “the way” in Spanish, has helped many find their way into the Catholic Church in a community that historically has not actively practiced its faith.

“Because of El Camino, students in our community are still getting baptized in the Catholic Church,” Valle says.

But many families in the Bronx face an obstacle on their path to Baptism. Contrary to a widespread belief among the community, a godparent in the Catholic faith cannot be someone who solely fills the role as guardian of a child if something were to happen to the birth parents. That role can be assumed, but parents are encouraged to choose a godparent for their child who will serve first as a lifelong spiritual mentor.

That person must also be a practicing Catholic and in good standing with the Church.

“My husband and I do the classes about sacramental preparation and we tell them the requirements for godparents. We tell them it’s different than what they think. Whoever is going to be the godparent needs to be an example of Christian faith. It’s gotta be somebody who will always be in their lives. It’s got to be someone who will look at your children and show them ‘this is what it’s like to be a Catholic.’”

“It’s important that students are being baptized by people who practice the faith,” says Stephanie Ortiz, a second cohort Seton Teaching Fellow and now kindergarten teacher at Brilla College Prep, “and who can fulfill the role of a godparent.”

The problem? In a community with so few churchgoers, finding a godparent for those students can be difficult. “Yeime Valle is that person for this community,” Ortiz says.

“She knows exactly what they, each one of them, need at all levels,” adds Sarah Meagher, another colleague.

“The only answer I can give you is that I was them,” says Valle when asked why so many families turn to her when seeking an example of faith in their community. “I get it. I get their loneliness. I get their difficulties. I get that one of their parents might not be in their lives. I get it.”

“When someone tells me they are an undocumented citizen, I can say, ‘Oh, my mom was like that.’ Or when I hear, ‘This is the abuse that I’ve experienced,’ I can say, ‘I know that. I know what you’re going through.’ That’s not to say that you have to experience all these terrible things to be able to help people. But I think families appreciate where I’ve come from. The families know I will not judge them. I am one of them.”

For a community lacking in faith formation resources, the families who send their children to Brilla and El Camino have found the ultimate godparent.

“Christianity isn’t something that I do,” Valle continues. “It’s who I am. It’s not about how I integrate being Catholic into the things I do. It’s how as a Catholic, I impact the things I am around.”

Her colleagues agree. “The only thing to say about her is that she’s truly a woman of incredible faith and strength,” says Meagher. “That guides her. She reminds us constantly. We are here for the kids. Don’t get confused with any other reason why you’re here. We are here to serve the children. With that clarity, she can be formidable.”

Valle’s journey to this life of faith came with many trials and tribulations. She grew up in Panama and spent many of her formative years with family members other than her parents.

“I started living with my grandma around when I was nine and that’s the first time we really talked about God, but that didn’t really translate to anything else,” she says. “It was more, at this age you’re supposed to do Communion. At this age, you’re supposed to do Confirmation. Like that type of Catholic. The only time we went to church was for a funeral or on Good Friday.”

“But as I grew older, I had an aunt who went to church all the time and I went with her. And it helped me fill the void I had from not having my mom. She would take me to do service, to make food for the poor. I started going to church every Sunday. And I liked what I was hearing there from the sermon, so I went to be confirmed. I became a catechist. And I’ve gone to church ever since.”

Valle never imagined she’d have over fifty godchildren, but she’s honored and grateful to be able to serve in this way.

“It is sad to me that a lot of people don’t have people like that in their life. Parents come to me and say I don’t know anyone like this. And it was a shocker to me. To hear them say, we don’t have anyone in our lives that are like this. They said, Ms. Valle, but you’re always here. The children see you.”

“I have to be quite honest. I had to go talk to my priest, and I said I don’t know if I can do this. And he said, ‘you are always telling parents that the most important job of a godparent is that they will be an example for the kids and pray for them. Aren’t you going to do that anyway?’”

“I said, ‘Yes, I’m going to do that.’ ‘OK,’ he said, ‘then you should be their godparent.’ That’s how it happened. And as years have gone by, families continue to come.”

For Valle, teaching so many godchildren about the Catholic faith has as much to do with actions as with words.

“I just try to show them,” she says. “I try to tell them that God loves them. I’m not here to change them or help them move out of the Bronx. The Lord calls us to meet people where they are and that’s what I’m trying to do, meet them where they are. That’s why, I think, when they sign up for Baptism, they come to me to be a godparent.”

“People don’t need you to tell them how they need to change. Rather, they need someone to tell them that God loves them.” And I guess I’ve been saying it so much that they come to me and ask.”

Valle has also inspired many other staff and Fellows to make the commitment to be a godparent when asked, but she continues to emphasize the responsibility involved so that godparents stay present in the lives of their godchildren.

Given this hopeful message and the warm heart behind it, it’s no surprise that so many children have asked Yeime Valle to play a vital part in the most important day of their lives.

The Cult of Efficiency