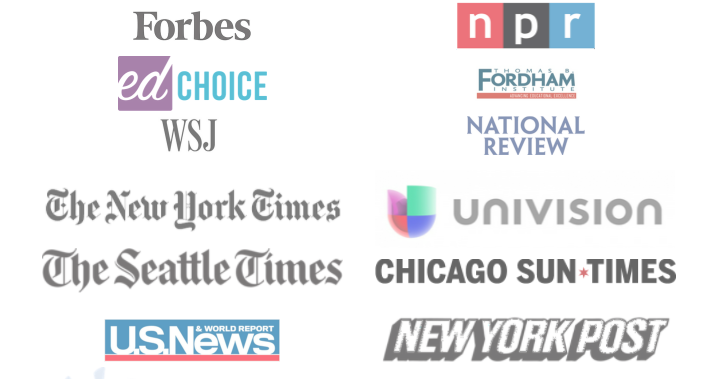 As we celebrate 12 years since the founding of Seton Education Partners, we are taking a stroll back in time to some of the many times our innovation, partnership and problem-solving has been featured across a variety of news outlets.

Forbes contributor and national research director at EdChoice, Mike McShane, looks at polling research and compares how effectively three education models use funds in the article, “Are We Getting The Most Bang For Our Education Buck?” Seton Education Partners’ blended learning work with Catholic schools is featured in the piece, noting that Seton is “growing to serve more and more students as their cost-effective models are proven to provide a solid product.” This was the second time Seton was mentioned on Forbes.com

Our first time being featured on an NPR affiliate was back in 2012, when co-founder Stephanie Saroki de García gave a national perspective on Philadelphia Catholic school closings.

The second instance was more recently, highlighting our blended learning work in Cincinnati.

The 2012 New York Times article interviews Scott Hamilton, Seton co-founder, about a Blended Learning Network school that more than doubled its enrollment from 95 to 185 after joining the network.

Our first feature with EdChoice was in a 2018 interview of Stephanie Saroki de García on Seton’s founding and opportunities to innovate with charter schools. The most recent is an article based on an interview with Emily Gilbride, Director of Seton’s Catholic Blended Learning Network, highlighting the effectiveness of our blended learning work.

Seton Education Partners is mentioned as a “light on the horizon” in a U.S. News and World Report article titled “The Problem of Dwindling Urban Catholic Schools.”

In an op-ed in the Seattle Times, Sean Kennedy discusses the impact of the Blended Learning Network, including: “lower per-pupil costs, better academic outcomes and more teacher-student interaction time.” He highlights the “16 percent spike in math proficiency and 6 percent increase in reading proficiency” while also seeing “per-pupil costs fall by 10 percent.”

Seton co-founder and managing director writes about the need for more “miracles” in American education.

The National Review interviews Luanne Zurlo, general partner and executive director of Brilla Schools Network, on the grim reality of life in the epicenter of the COVID-19 pandemic and living a single, quarantined life in NYC.

The NY Daily News featured an Op-Ed from Kathleen Porter-Magee on Two ways to save Catholic schools, highlighting Seton as an innovative solution that “Diocesan leaders across the country should continue to look to seed, support and expand” to help save Catholic schools.